Every day, parents of children battling cancer travel thousands of miles for treatments. 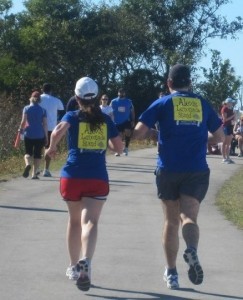 A million miles is a lot. It’s 38,000+ marathons. It’s two whole trips to the moon and back. But according to Jay Scott, Co-Executive Director of Alex’s Lemonade Stand, and everyone else at the foundation, a million miles is “just how far parents of children with cancer would go to find a cure for their child.”

This September, Alex’s Lemonade Stand is proving that, and asking you to help. In honor of National Childhood Cancer Awareness Month, they’re enlisting runners and walkers to collectively log one million miles. Your mission: Sign up to be one of 10,000 participants who each pledge to walk 100 miles over the course of 30 days, and help raise awareness about a disease that affects 720 new children in the United States every single day.

To easily track your daily miles, Alex’s Lemonade Stand has teamed up with the free MapMyRun app. Participants who want to do their part solo will need to average 3 to 4 miles a day, but folks who need something more manageable can split the 100 miles among a group of friends or coworkers.

Need another reason to get involved? Let us provide some back story to the inspiring Philadelphia-based organization. Back in 2000, four-year-old Alexandra Scott set up a lemonade stand to single-handedly raise money and hopefully fund the cure for cancer that affected all children like her. And though the effort has been far from single-handed (if only because Alex wasn’t then tall enough to even reach the phone), the accomplishments that have and will continue to stem from a child’s simple wish are boundless. Alex raised over $1 million to fight the disease from which she passed away in August of 2004, and her friends and family continue on in her honor. Today, supporters all over the world have their own lemonade stands for Alex. Now, the Million Mile Run will help push the charity’s progress.

So get running. And jogging. And walking. Every step counts toward the goal, and getting involved could help save a life.

Now you can Visit their website for more details on how to get started today.

Protect your child from you start!

What should we do when we meet Endometriosis