Uncontrolled high blood pressure, or hypertension, has declined among men over the past decade but increased among American women — about 25 percent of us now have it. And it contributes to more deaths in women than any other preventable factor, according to a 2009 Harvard University study. While you should be concerned if your cholesterol is high, having hypertension is much more likely to kill you than high LDL cholesterol is, says Michael F. Roizen, MD, chief wellness officer at the Cleveland Clinic and a member of the LHJ Medical Advisory Board. 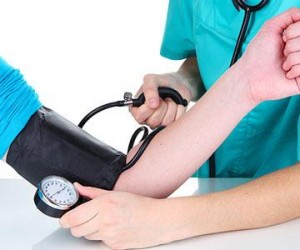 More young women are being stricken with high blood pressure because of rising obesity and stress in their lives. Also, hypertension can hit during pregnancy and pose grave health consequences for expectant mothers and their babies. Genetics plays a role, too: If hypertension runs in your family, your risks are higher.

Because hypertension has almost no symptoms, and so many women aren’t seeing a doctor regularly, it often goes undetected for years. Yet the excessive pressure of blood coursing through your arteries can cause stretching, weakness, scarring, increased risk of blood clots, and other damage. It can harden your arteries, which may lead to a stroke or heart attack. Weakness in the blood vessel walls can create an aneurysm (abnormal ballooning of a portion of an artery), which is life-threatening if it ruptures. Because of hardening of the arteries, or the increased volume of blood from too much salt, the heart has to work harder to pump blood, which could eventually result in heart failure. Since high blood pressure limits blood flow, organs don’t get enough vital nutrients, so your kidneys might fail and your brain won’t function as well, causing problems with memory and learning.

Ignoring high blood pressure is a recipe for disaster. “The chronic wear and tear on your blood vessels is like driving a car with tires at too high a pressure,” says Mary Ann Bauman, MD, an internal medicine specialist in Oklahoma City and spokesperson for the American Heart Association. “Eventually they’re going to blow or simply not last as long as they should.”

That’s why it’s vital to get tested regularly throughout your life and practice prevention. “Now is the time to be vigilant. The younger you are, the easier it is to make corrections,” says Suzanne Oparil, MD, director of the Vascular Biology and Hypertension Program at the University of Alabama in Birmingham. Here’s what you need to know to prevent lasting damage.

The Salt Connection
In many cases doctors aren’t sure what causes hypertension, but age, family history, and lifestyle factors all play a role. And for many women eating too much salt plays a part, too. Your kidneys, which normally control your sodium level, become overloaded, so the extra salt spills into your bloodstream. Because salt makes you retain fluid, it bulks up the volume of blood flowing through your blood vessels. This increases the pressure pushing against the walls of your arteries and boom — you now have hypertension.

Unfortunately, the average American woman eats about 3,000 milligrams of sodium a day, double the recommended dose of up to 1,500 milligrams (about two-thirds of a teaspoon). The salt shaker at home usually isn’t the problem. Most sodium intake comes from fast foods (like burgers and pizza), restaurant dishes of all kinds, and processed foods, such as pickles, ham, bacon, salsa, cheese, cold cuts, olives, canned soups, even bread and meat.

The effects can be even worse for the more than two out of three adults who are ultrasensitive to sodium. This group includes everyone over the age of 40 (blood vessels lose their elasticity as you get older) and African Americans, who experts believe are genetically programmed to be more sensitive to salt.

Researchers have shown that if Americans managed to cut their sodium intake in half, it could save at least 150,000 lives a year. But consumption is going up. In 2010 the Institute of Medicine called for the FDA to regulate salt in processed foods. “Sodium is so prevalent in all food groups it’s almost impossible for consumers to manage the situation on their own,” says Jane E. Henney, MD, professor of medicine at the University of Cincinnati.

Still, food makers think regulating sodium isn’t the best solution since salt helps create structure in bread, encourages browning of baked goods, and acts as a food preservative. A voluntary plan is a better strategy, argues Melissa Musiker, a registered dietitian and director of science policy, nutrition, and health for the Grocery Manufacturers Association in Washington, D.C. “The food industry should provide more low-sodium products, and consumers need to be aware and monitor their intake.”

Natural Ways to Reduce Your BP
Lifestyle changes can shrink your risk of high blood pressure by a whopping 78 percent, research shows, even if you have a family history.

Lose weight: Extra pounds are the top predictor of high blood pressure in women, says a 2009 Harvard study. The more you weigh, the more blood your body needs to supply oxygen and nutrients to your tissues. This increases the volume of blood circulating through your blood vessels, which boosts pressure on your artery walls. Getting to a healthy weight, meaning a BMI under 25, cuts your risk of high blood pressure by 40 percent. (If you’re 5-foot-4 and 140 pounds or less, that puts you in the healthy zone.) Not even medication affects blood pressure as much as losing weight. For every 20 pounds you trim, you can drop blood pressure by up to 20 points.

Get moving: Doing 30 minutes of vigorous exercise every day can make a big difference. After all, your heart is a muscle. The more you work out, the more efficiently it pumps blood, which keeps vessels flexible.

Cook more: Help shake your salt habit by cooking more whole foods at home and avoiding the drive-through. Check labels of canned, frozen, and packaged foods and pick ones that are the lowest in sodium. When you cook, use flavorful herbs and spices or a squeeze of lemon or lime instead of reaching for the salt shaker.

Calm your stress: Juggling your career, your family, and your social life can make you feel frazzled. When you’re stressed your body produces a surge of hormones, like adrenaline and cortisol, which helps you conquer deadlines. But this may also cause a temporary spike in blood pressure by making your heart beat faster and your blood vessels narrow. Relaxation techniques like deep breathing and meditation can help reduce the pressure.

Log enough sleep: Getting less than six hours of sleep a night dramatically increases the risk of high blood pressure, especially in the childbearing years, according to a 2010 study in the Journal of Hypertension. Sleep keeps stress hormones in check and helps your nervous system remain healthy by recharging your batteries.

Sodium can really add up over the course of your day. It’s not hard to imagine eating these three meals, which deliver more than three times the recommended daily sodium intake of 1,500 milligrams.

How Low Should You Go?
Blood pressure is expressed as a ratio.

Systolic, the top number, is the pressure in your blood vessels while your heart contracts to pump blood to your body.

Diastolic, the lower number, represents the pressure when your heart relaxes between beats.

You can add years to your life by reducing your blood pressure. Current guidelines say 120/80 is optimal, but many experts believe 115/75 is even better. You should aim for 115/75, says Dr. Roizen. That’s backed up by the results of a landmark study involving more than 20 million people in 52 countries. “The good news is that we can get almost everyone to 115/75 now using a combination of lifestyle changes and medication,” he says.

Hypertension and Pregnancy
Up to 8 percent of pregnant women get hypertension, which can be extremely dangerous for mom and baby. It’s increasing as women are getting heavier and having babies later.

Gestational hypertension, which usually develops after the 20th week of pregnancy, can cause premature delivery and puts you at risk for stroke or cardiac arrest. It also makes you more likely to develop heart or kidney disease later in life. It’s usually controlled with medication or by delivering the baby.

Preeclampsia, a more serious condition that can happen if you’re over 40 or carrying twins or triplets, prevents the placenta from getting enough blood, depriving the fetus of oxygen and vital nutrients. Besides premature delivery, it can lead to rupture of your liver, kidney failure, hemorrhage, stroke, or even death. The only cure is delivery.

Here have some suggestion for heart prevention when Your 20s, 30s,40s,