One in five American women who contract lung cancer this year will be what researchers call “never smokers” — those who have taken a drag on fewer than 100 cigarettes in their lives. Sixty percent of never smokers with lung cancer are women. In fact, the number of such women diagnosed each year in the United States — roughly 20,000 — is comparable to the number of women who are found to have ovarian cancer. And never-smokers’ cancer can strike young. “In my practice, I’ve seen women in their twenties, thirties, and forties with the disease,” says Christina Baik, MD, a thoracic oncologist and staff scientist at the Fred Hutchinson Cancer Research Center in Seattle. 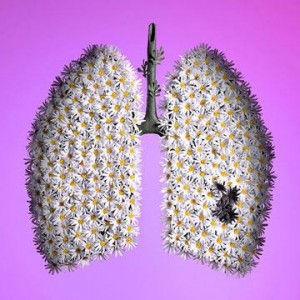 Clearing the Smoke
The first question people ask Kathy when she says she has lung cancer is whether she smoked. “When I say no, I almost feel as if they don’t believe me,” she says.

Until about 10 years ago, even doctors found it improbable that nonsmokers could have lung cancer. “If a young woman came in with a spot in her lung, it was presumed to be cancer that spread from someplace else,” says Joan Schiller, MD, the president of the National Lung Cancer Partnership. “Patients were being misdiagnosed.”

During the last decade, though, scientists discovered that specific gene mutations were more commonly occurring in never smokers. This finding signaled that lung cancer wasn’t a disease that affected everyone uniformly, and researchers began focusing on never smokers. Hollywood lifted the smokescreen for the rest of us in 2006 when Dana Reeve, the wife of the late actor Christopher Reeve, died of lung cancer at the age of 44 without ever having smoked a cigarette.

Doctors haven’t pinpointed why nonsmokers get lung cancer. A lot of research is centered on the air we breathe: Secondhand smoke contributes to more than 3,000 lung cancer deaths among nonsmokers every year, according to the National Cancer Institute. Three thousand more nonsmokers with lung cancer die annually after being exposed to radon; this odorless, invisible radio­active gas comes from the natural breakdown of uranium in soil, rock, and water and seeps into homes through cracks and holes in the foundation. Pollution is another potential culprit. University of Ottawa researchers recently found that people who have never smoked, but who live in areas with high air-pollution levels, are roughly 20 per­cent more likely to die from lung cancer than people who live in areas with cleaner air.

Your sensitivity to harmful particles in the air may be a trait that runs in your family. When you breathe in carcinogens, they are absorbed into the bloodstream, and it’s your liver that’s in charge of clearing them out. The latest research suggests that some people may have livers that are sluggish, allowing carcinogens to linger in the bloodstream and do their damage; others, Dr. Schiller explains, may have the type of overactive livers that break down nonharmful molecules and turn them into carcinogens. These molecules are then sent back into the blood to circulate throughout the body; if lung cells absorb them, that is where the cancer will grow.

Science hasn’t given Emily Roberts, 38, of Tustin, California, any insight into the cause of what tests revealed to be a baseball-size tumor in the lower part of her left lung three years ago. A vegetarian and an avid hiker, she had always been the one in her family with an immune system of steel, staying healthy even when her husband or three boys picked up colds or the flu. But after she suddenly blacked out one night, an MRI revealed lesions on her brain, and further tests showed they had spread from her lung. “I have no significant risk factors for lung cancer, like smoking, radon exposure, or living in an area with air pollution,” Emily says. “It just happened.”

Perhaps Emily’s greatest risk factor is that she’s a woman. Never-smoking women are almost twice as likely to be diagnosed with lung cancer as never-smoking men. Researchers suspect that hormones may play a role. In a study of more than 100,000 women, Dr. Baik found that the more children a never-smoking woman had, the less likely she was to get lung cancer. “It’s possible that pregnancy may change a woman’s lung cells, making them resistant to cancer,” she says.

Diagnosing and Treating Lung Cancer
Difficult to Diagnose
In the summer of 2007, Laura McCracken of Dallas was at the gym doing chest presses when she first noticed a dull ache in her chest that felt as if she had pulled a muscle. “I thought I had overdone it,” Laura, 35, says. She went to an orthopedic surgeon when the pain wouldn’t go away. He took a chest X-ray and sent her home with pain medication for what he suspected was bruised cartilage. With the ache still nagging about two months later, she went to her internist, who refilled the painkiller prescription. But by December, Laura was feeling stabbing pain near her rib cage; her chest hurt when she lay down at night and her left shoulder was sore after working long hours at the computer. Two weeks before Christmas, she was in a hospital emergency room with a diagnosis of lung cancer, which had spread to her lymph nodes and bloodstream. “I had tried to excuse the pain away, saying, ‘Oh, it will get better,'” Laura says. “But I should have insisted to my doctors that something was wrong.”

Diagnosing lung cancer is tricky, because the lungs don’t have sensory nerves. You can’t feel a tumor growing in them until it is large enough to press on the airways or another organ and cause the typical signs: chest pain, a sudden cough that won’t go away, coughing up blood, wheezing, or hoarseness. Because these symptoms are similar to those of illnesses like bronchitis and pneumonia, doctors may first suspect such infections in a young woman who has never smoked.

A Brighter Future?
Fortunately, a number of young, never-smoking women with lung cancer are starting to live longer, thanks to recent advances in lung cancer medicines. Some women are eligible for targeted-therapy drugs, which block chemicals that signal the cancer cells to grow and divide. Taken daily, these medications have fewer side effects and better results than traditional chemotherapy: In one study, a targeted-therapy drug shrank lung tumors in 74 percent of patients, while chemo had the same effect in only 31 percent. Apart from having skin rashes and nausea, Laura feels somewhat like her old self after being on a targeted-therapy drug for more than four years. She has taken up cycling again, riding 10 miles whenever the weather is nice and going to the gym for Spinning classes. Yet she knows she’s beating the odds: Most lung cancers develop a resistance to the drugs within a year. “You never know when it’s going to return,” she says.

While some scientists are working to develop second- and third-generation drugs to battle resistance, other researchers are pushing for advances in early detection. Because CT scans may lead to unnecessary, invasive procedures in which doctors feel obligated to biopsy any small nodules the scan picks up, the current screening protocol is to give the scans only to high-risk patients, like 30-year pack-a-day smokers. “There are several blood and breath tests being developed for early detection of lung cancer, and I hope in the next five years we’ll have one that works,” Dr. Baik says.

How to Protect Yourself from Lung Cancer
Puffing on cigarettes is still the top cause of lung cancer, and women who do so are 13 times more likely to get the disease. But you don’t need a pack-a-day habit to make you ill. Check out these three factors that can raise — or lower — your chances.

You used to smoke. Your lung cancer risk went down soon after you took your last drag. Researchers at the Harvard School of Public Health found that five years after quitting, a female former smoker is 21 percent less likely to die from the disease than a woman who continues to smoke. Her risk is further reduced each year.
Your husband smokes when you’re not around. It’s good that you’re not breathing in secondhand smoke (which increases your chance of contracting lung cancer by 20 to 30 percent), but his unhealthy ways could still be bad for you. Researchers at the Lawrence Berkeley National Laboratory found that “thirdhand smoke” — the nicotine vapors that cling to hair, skin, furniture, car interiors, and dust for days and even months after someone has smoked — react with the common indoor air pollutant nitrous acid. Together they produce dangerous carcinogens that can be inhaled with dust or enter the bloodstream through the skin.
You sneak a few cigs after work. Lung cancer risk for women ages 35 through 49 who smoke one to four cigarettes a day is five times higher than that of nonsmokers, according to a study from the University of California, San Francisco’s Center for Tobacco Control Research and Education. “There’s a widespread belief that a single cigarette won’t hurt you, but that’s not true,” says Stanton A. Glantz, PhD, the center’s director. “You’re still exposing yourself to cancer-causing chemicals.”
Rule Out Radon
The Environmental Protection Agency estimates that nearly one in 15 homes in the United States has unhealthy levels of radon, an odorless gas that is second only to smoking as the top cause of lung cancer. To test your home for radon, buy a DIY kit at your local hardware store (or for $15 to $25 at sosradon.org). If readings are at four picocuries per liter or higher, the EPA recommends that you install a radon reduction system, usually a pipe and fan that vents the vapors to the outside. Find a certified radon contractor in your area at neha-nrpp.org or nrsb.org. Also, alert your doctor, who can assess your lung cancer risk.

How Clean Is Your Air?
Bakersfield, California, was one of the most polluted cities in the nation last year, while the people of Cheyenne, Wyoming, were breathing easy. Keep track of daily air-quality reports in your city at airnow.gov. The EPA-sponsored website allows you to type in your zip code to find up-to-the-minute data on ozone and pollution. When levels are high, exercise inside.

What to Eat to Beat Lung Cancer
While there’s no diet proven to protect you from lung cancer (doctors say eating plenty of fruits and vegetables is your best bet), researchers have ID’d certain foods and eating strategies to help lower your risk.

Choose veggies over vitamins. Cruciferous vegetables, such as broccoli, cauliflower, kale, and cabbage, contain glucosinolates, a type of chemical compound believed to reduce the risk of lung and other cancers. (Glucosinolates are available in supplements, but the body does not absorb the crucial cancer-fighting compound in pill form as efficiently as it does from food sources.) To get the maximum protective benefits, eat these veggies raw or steam them for no more than four minutes.

Snack on soy. Isoflavones, compounds found in soy, have been shown to slow lung cancer cell growth in the lab. Scientists have also discovered that people with the most soy in their diet — especially from unfermented foods like soy milk and tofu — had a 23 percent lower risk for lung cancer compared with those with the least.

Drink tea. A recent study published in Chest found that black tea helped protect nonsmoking women from lung cancer. And smokers and nonsmokers who drank at least one cup of green tea a day were five times less likely to get the disease than those who didn’t drink any, another study found.

Go easy on spirits. Having three or more alcoholic drinks a day increased the risk of lung cancer by 30 percent, research showed.

Here have some suggestion for heart prevention when Your 20s, 30s,40s,

What should we do when we meet Endometriosis