A few sobering facts: About 24 million Americans may have chronic obstructive pulmonary disease (COPD) and half of them don’t know it. It’s the fourth leading cause of death, and the only leading cause of death that’s actually getting more common. How common, you ask? COPD is responsible for more deaths each year than breast cancer and diabetes combined. 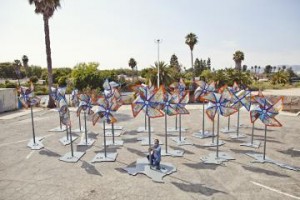 But despite all this startling information, we don’t hear much about the lung disease that hampers one’s ability to breathe. (The ribbon for this cause is gold, if you were curious!) That’s why artist and sculptor Michael Kalish created the 24M: The DRIVE4COPD Monument that will be on tour around the country this year. It’s an art display created to inspire people to take notice of this important health issue and take control of their health.

The monument involves 24 pinwheels—in honor of the 24 million Americans who may have COPD—placed on a state-shaped base to form a map. Kalish used license plates (his artwork’s signature building block) to form the pinwheels, and the number of plates used from a particular state reflects the percentage of the state’s population struggling with COPD. The pinwheels symbolize a healthy ability to breathe—you can’t make a pinwheel spin if you can’t take a deep breath!

Some news you can use about COPD, how it impacts you and how you can take action:

1.There are two types of COPD: Chronic bronchitis and emphysema.
2.Symptoms include shortness of breath, coughing, chest tightness and wheezing. Those who suffer may feel like they’re breathing through a thin straw.
3.The causes include smoking (those who do so are 10 times more likely to die of COPD than those who abstain!), genetics and air pollution.
4.Many don’t catch their COPD until they’ve lost half of their lung function or require emergency care. Symptoms are manageable with a doctor’s guidance, and the earlier the disease is diagnosed, the better the prognosis for the patient.
5.You can take a five questions quiz to learn if you are at risk for COPD at DRIVE4COPD.com, and discuss the results with your doctor at your next exam if you rank high on the risk scale. Score yourself today or join others by participating in the “Great American Screen Off” on November 4.

Is that true? Bacteria can lead to Type 1 Diabetes!