The risk of traumatic brain injury is particularly high among football players. A new study sets out to investigate if football players are also at a higher risk of developing degenerative brain diseases later in life. 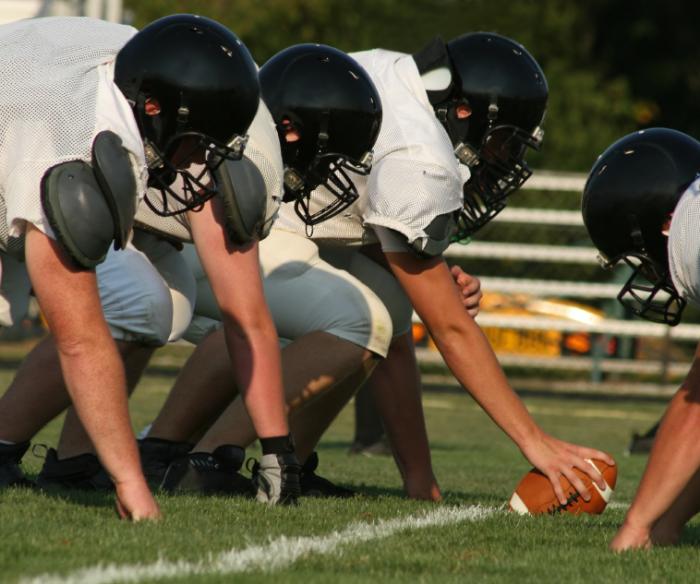 Compared with other athletes, American football players do not seem to be at a higher risk of neurodegenerative disease, researchers say.

Traumatic brain injuries (TBI) are defined by the American Association of Neurological Surgeons (AANS) as “a blow or jolt to the head, or a penetrating head injury that disrupts the normal function of the brain.”

All athletes are at risk of TBI, but the risk is especially high among cyclists and football players.

According to the AANS, out of 446,788 cases of sports-related brain injuries treated in American emergency rooms in 2009, 46,948 were reported by football players.

Some researchers have hypothesized a link between TBI and the onset of neurodegenerative diseases, such as Parkinson’s and dementia, in professional athletes.

Examining the risk of brain degenerative disease in varsity athletes

A team of researchers in Rochester, MN, led by Mayo Clinic neurologist Dr. Rodolfo Savica, set out to examine the risk of neurodegenerative disease among high-school football players and other varsity athletes.

Scientists reviewed all the yearbooks and documented team rosters for Mayo High School and John Marshall High School – formerly called Rochester High School – between 1956 and 1970. The students were followed for a total of 40 years after participating in high-school sports.

The findings were published in the journal Mayo Clinic Proceedings.

The study examined a total of 486 students, 296 of whom were football players, and the remaining 190 were non-football athletes.

MCI is considered to be a set of symptoms rather than a disease in itself. It refers to the slightly decreased cognitive abilities in individuals who are 65 years of age and over. The minor cognitive decline these patients report does not interfere significantly with daily activities, but studies have shown an increased risk of dementia in people with MCI.

The study did find a suggestive increased risk of TBI among the football players, and the risk was higher for the 153 students who played for more than one season.

However, the study did not find an increased risk of degenerative brain diseases among football players, compared with the other athletes.

Comparatively, 14 cases of head trauma were reported among the 190 non-football athletes, amounting to just over 7 percent.

Of the non-football athletes, four had developed MCI, three reported having Parkinson’s disease, and one case of dementia was reported. No cases of ALS were reported among football players.

Another 2.1 percent of the non-football athletes developed MCI, compared with 1.68 percent in football players.

Football-related head trauma risk should not be underestimated

Despite the proven physical fitness benefits of varsity sports on cardiovascular and overall health, the authors warn against the serious issue of brain trauma risks in football.

As mentioned by the authors, in the decades between 1956 and 1970, football-related head trauma was still minimized, with coaches and industry professionals referring to it as “getting your bell rung.”

Furthermore, a previous Mayo Clinic study conducted between 1946 and 1956 did not find an increased risk of degenerative brain disease among football players. The previous research compared 438 male football players with 140 non-football-playing classmates.

Despite the optimistic findings, Dr. Savica and team caution against underestimating the risk of traumatic brain injury:

“This study should not be interpreted as evidence that football-related head trauma is benign. The literature on chronic traumatic encephalopathy in college and professional football players seems irrefutable, with reports of devastating outcomes. However, there may be a gradient of risk, with low potential in high-school football players that played in the study period.”

Although football between 1956 and 1970 was largely similar to football today, the researchers highlight the need for more current football studies.

The authors concede that between then and now, football has evolved, with changes in safety measures – such as headgear design. But although helmets once made of leather now come in hard plastic shells, Dr. Savica says the headgear still does not protect against concussions and gives players a false sense of protection.

Learn how early return to play after concussion may be harmful for young athletes.

Marijuana Can Help To Crack Down On Drug Abuse, Mental Health Illnesses