Scientists at the Stanford University School of Medicine in California reveal a control mechanism for fatty tissue to increase intake of calories via a pathway switched on by a hormone and diet-responsive protein dubbed ADAMTS1. This discovery may help to unravel how high-fat diets, stress, and some steroid medications lead to obesity. 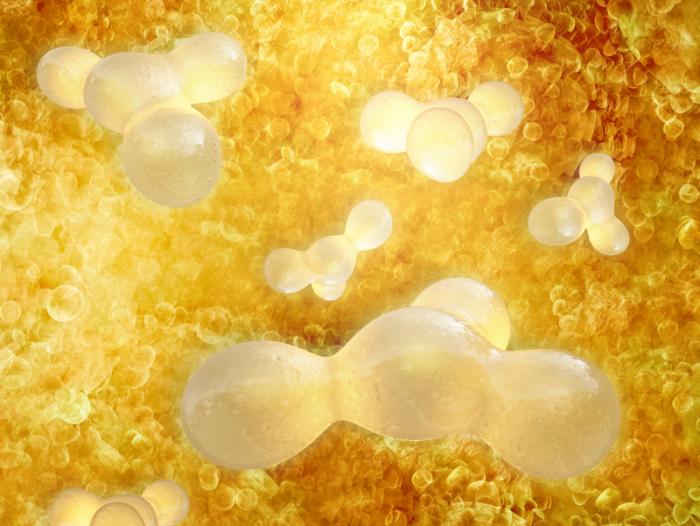 The hormone ADAMTS1 has been suggested to control fat formation in response to high-fat diets and glucocorticoid medications.

Fat depots – sites where large quantities of mature fat cells are stored along with small amounts of stem cells – are distributed in various locations around the body. The findings – published in Science Signaling – piece together the puzzle of how the stem cells in these areas are triggered to change and develop into more fat cells.

The research indicates that the production of ADAMTS1 hormone may increase fat formation as a result of a high-fat diet and taking glucocorticoid medications.

“Intuitively, people understand that when you eat more, you get fatter,” says Dr. Feldman. “You’re ingesting food, and some signal has to tell your body to make more fat. We didn’t know what was gating or triggering that process in vivo. This new research goes a long way to fill in the in-between steps.”

Previous studies have shown that while mature fat cells have a primary storage function, they also send and receive many hormone signals to help regulate metabolism.

The Stanford team conducted experiments using fat cells and fat stem cells in a lab, followed by mice and human studies to investigate the function of ADAMTS1.

The researchers set an objective to understand how obesity risk is increased through glucocorticoid medications.

Mice experiments showed that mature fat cells usually produce and secrete ADAMTS1. However, when mice were given glucocorticoids, the levels of the hormone dropped. When mice were genetically engineered to produce more ADAMTS1 than average, they were found to have smaller fat depots and fewer mature fat cells.

Laboratory experiments revealed that when purified ADAMTS1 was added to fat stem cells in a dish, the hormone blocked the glucocorticoid-induced differentiation from fat stem cells to mature fat cells, which suggests that ADAMTS1 typically acts as a signal outside of fat cells.

Upon reaching the fat stem cell, the researchers say that the hormone transmits instructions through signals inside the cell that overlap with the cells’ glucocorticoid response pathway. The team also points out that a cell-signaling molecule, called pleiotrophin, plays a crucial role in the pathway. Blocking the molecule’s signal appears to block the stem cells’ entire response to ADAMTS1.

Mice were provided with a high-fat diet to examine the effect of the diet on ADAMTS1 signal. As a result of the high-fat diet, the mice became fatter, and new fat cells matured in visceral fat tissue – the fatty tissue that surrounds the internal organs – with decreased ADAMTS1.

However, in contrast, increased ADAMTS1 and less fat cell maturation were seen in subcutaneous fat tissue – the fat under the skin.

These results are consistent with earlier studies that show that more visceral, but not more subcutaneous fat cells, mature when a high-fat diet is consumed. These findings suggest that the hormone is a significant regulator of the difference in mature fat cells between the two types of fat.

Finally, in humans who gained weight from a high-fat diet, the same responses were observed as in the mice experiments.

The research provides an overview of how high-fat diets and both synthetic and natural stress hormones are linked to obesity. Stress hormones transmit a message via ADAMTS1 to mature more fat cells. “We think it is a signal that there may be hard times ahead, a trigger to store as much available energy as you can,” says Dr. Feldman.

Dr. Feldman notes that the same signals and processes take place when people consume a high-fat diet without being stressed or taking glucocorticoid medications. “We’ve basically seen that the glucocorticoid signal is embedded in the high-fat feeding pathway. Connecting those dots together was really exciting,” he adds.

While there may be other undiscovered hormones that influence maturation of fat cells, the potency of ADAMTS1 indicates that the hormone is a dominant signal and a major player, Dr. Feldman continues.

The findings may help understand how fat formation during childhood affects the risk of lifelong obesity.

“We know that fat is a critical endocrine organ, formed almost exclusively during childhood. The rate of fat formation in childhood has lifelong implications, and understanding how that’s controlled and regulated is very important.”

The team is uncertain, however, of whether the findings could be used as a target for anti-obesity drugs. “If you block fat formation, extra calories have to go somewhere in the body, and sending them somewhere else outside fat cells could be more detrimental to metabolism,” explains Dr. Feldman.

“We know from other researchers’ work that liver and muscle are both bad places to store fat, for example. We do think there are going to be opportunities for new treatments based on our discoveries, but not by simply blocking fat formation alone,” he concludes.

Read about how restoring the omega-3 and omega-6 balance in the diet may curb obesity.

DEA Denied The Request To Relax The Federal Rules Of Pan