Opsin is the main component of the photosensitive material, includes two categories of opsin in the visual system and visual system of opsin, in visual imaging and biological circadian clock synchronization regulation plays a crucial role in medical science. 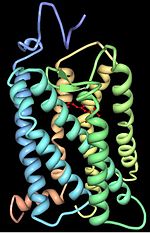 An opsin is a protein found in the retina that is sensitive to light. Many opsins are involved in transmitting signals from light to become visual images. Other types of these proteins were discovered in the 1990s. These have non-visual, and often unknown, roles in physiology, as of 2010. A non-visual opsin of known function is melanopsin, which is involved in setting circadian rhythms.

In their arduous journey to the egg, sperm “feel” the heat of the fallopian tube and “taste” the chemical signals of the ova. But a new Weizmann Institute of Science study published in Scientific Reports, in Nature, shows that sperm actually make quite a bit of use of sensors that have mainly been known to belong to the visual system.

If a sperm, about 46 microns (thousandths of a millimeter) long, were the size of a human being, it would swim several kilometers to reach its destination. Thus, sperm need to be guided by various cues.

In earlier studies, Prof. Michael Eisenbach and his team discovered two of these guidance mechanisms – heat sensing and chemical cues. The heat attraction works across the longer range: The site of the fertilization is warmer than the spot at the entrance to the fallopian tube where the sperm pause for maturation, and this temperature difference points them in the direction of the egg. When they get closer to the egg, they pick up its chemical signals. “As in all important processes in nature, the sperm rely on more than one mechanism in their navigation, so that if one breaks down, others can provide a backup,” Prof. Eisenbach says.

The heat sensitivity of sperm is extremely high. From a distance equivalent to the length of one sperm cell, they can sense differences in temperature as miniscule as 0.0006 of a degree Celsius – less than one thousandth of a degree. This sensitivity enables them to be guided by a very gradual increase in temperature on the way to the fertilization site.
In the new study, Prof. Eisenbach’s team – Dr. Serafín Pérez-Cerezales, Dr. Sergii Boryshpolets, Oshri Afanzar, Dr. Reinat Nevo, and Vladimir Kiss of the Department of Biological Chemistry and Dr. Alexander Brandis of Biological Services – set out to discover exactly how sperm sense the heat. The scientists examined a particular category of receptors that, based on their previous studies, were thought to be involved in conveying signals to the sperm. Within this category they zeroed in on a family of proteins called opsins.

Opsins are best known for their role in an entirely different sphere: the visual system. One major protein in this family, called rhodopsin, serves as a photoreceptor in the cells of the retina. But studies by other researchers working with fruit fly larvae had found this protein involved in responding to heat, hinting that this could also be the case in sperm.

The scientists found that several proteins in the opsin family of receptors were present on the surface of mouse and human sperm. Each opsin had its own distribution pattern on the sperm, and each apparently made a contribution, through its own set of signals, to heat sensing. When the researchers blocked the signals from these opsins, the sperm failed to swim from a cooler to a warmer chamber.

These rather surprising findings may explain the enigmatic presence of opsins in organs that are not exposed to light, including the lungs and the liver. They suggest that the mammalian opsins may be performing heat-sensing functions in these parts of the body.