Dining with a 1-year-old is typically a messy endeavor, with more food often reaching the floor than the mouth. But a new study investigates what babies pay attention to at the dining table, and the findings have implications for shifting unhealthy eating habits. 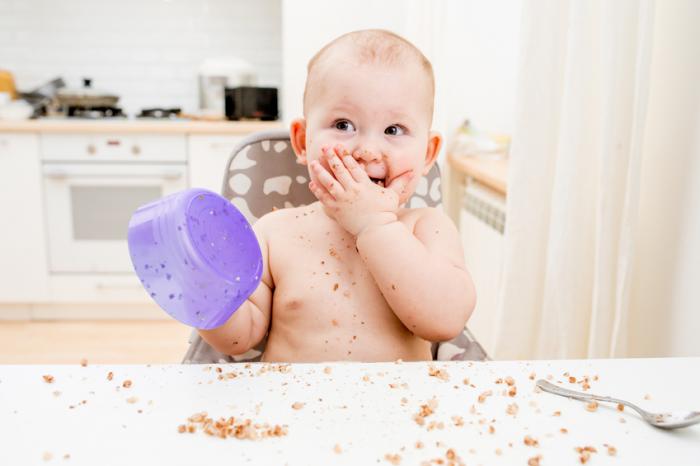 The study comes from researchers at Cornell University in Ithaca, NY, and is published in the Proceedings of the National Academy of Sciences.

Co-authored by Katherine Kinzler, associate professor of psychology and human development at Cornell, the researchers say their work contributes to a growing body of research that suggests very young children think in more sophisticated ways about even small social cues.

To carry out their work, the researchers conducted a series of studies through which they showed over 200 1-year-olds a set of videos in which people showed like or dislike of foods.

The team used a well-known fact of developmental psychology, which is that babies look longer at new actions or things that depart from their expectations of the world.

“Kids are sensitive to cultural groups early in life,” says Kinzler. “When babies see someone eat, they are not just learning about food – they are also learning about who eats what with whom. An ability to think about people as being ‘same versus different,’ and perhaps even ‘us versus them,’ starts very early in life.”

‘Humans do not choose foods in isolation’

The researchers observed that when the babies saw two people in the video speak the same language or behave like friends, the babies expected them to like similar foods.

However, when they watched two people who spoke different languages or who acted unfriendly toward each other, the babies expected them to like different foods.

Kinzler says that it could be down to bilingual babies having experienced this in their own homes, where people who speak different languages nevertheless eat the same foods while gathered around the table.

“Language wasn’t marking groups in the same way for these kids,” she adds.

“Thus, whereas food preferences are seen as embedded within social groups,” the researchers write, “disgust is interpreted as socially universal, which could help infants avoid potentially dangerous foods.”

The researchers conclude their study by writing:

“Critically, though, humans do not choose their foods in isolation. Reframing food selection as a social rather than nutritional problem may shed light on the relevant mechanisms that could support early reasoning about food.”

They add that their research could have significance for policymakers who want to change people’s unhealthy eating habits. Additionally, Kinzler says that parents may want to take note.

“If you feed your child the perfect diet, yet your child sees you and your friends and family eating junk food, she is presumably learning about foods from her social experiences, too,” she adds.

Read about how antibiotics could raise children’s food allergy risk.