One of the hallmarks of Alzheimer’s disease is toxic plaques of a protein building block or peptide called amyloid beta that enters brain cells and destroys them. There is a big debate as to whether amyloid beta is toxic before or after it enters cells. Now, by showing that the peptide changes shape before it crosses the cell membrane, scientists step closer to an answer. 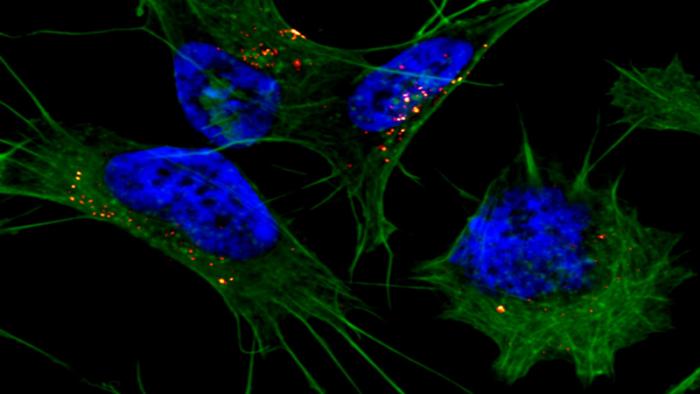 Alzheimer’s disease is a progressive, irreversible brain disorder that erodes memory and thinking skills, and eventually deprives people of their ability to lead an independent life.

Estimates suggest the disorder may rank third, just behind heart disease and cancer, as a cause of death for older Americans.

While the causes of Alzheimer’s are still a mystery, scientists do know that brains of people with the disease begin to undergo complex, toxic changes, some of which begin 10 years or more before memory and thinking problems appear.

Two of these toxic changes are the formation of amyloid plaques and tangles of another protein called tau. At the same time, there is a gradual loss of healthy neurons that stop working, lose connections with each other, and die.

The new study, published in the Journal of Biological Chemistry, is the work of a team from the United States and Germany, led by Jan Bieschke, assistant professor of biomedical engineering at Washington University in St. Louis, MO.

The researchers found that before amyloid beta can be absorbed into the cell, it must form into long, flat sheets where the peptides stack onto each other – rather like a layer cake, as Prof. Bieschke explains:

“Somewhere on this aggregation pathway, this type of structural element is formed for the amyloid beta to get into the cell. There is a two-step process: amyloid beta can bind to the membrane and form aggregates while on the surface of the cell, then it gets taken up into the cell.”

The finding helps to address a long-standing debate about whether amyloid beta is toxic before or after entering the cell.

Once inside the cell, toxic amyloid beta disrupts it by interfering with its mitochondria – the compartments that make energy for the cell.

The result is that the cell stops breathing and eventually dies.

Armed with the new information about beta sheets, the team now plans to follow what happens after amyloid beta crosses the cell membrane and proceeds to interfere with mitochondria.

“Another question we will ask is: Can we manipulate the uptake or formation of these structures so they cannot enter the cell? This may be a therapeutic strategy to help future patients with Alzheimer’s.”