There is no cure for amyotrophic lateral sclerosis – a fast-progressing neurological disease that affects more than 12,000 people in the United States – but a new study may bring us closer to one. Researchers have identified a way to reverse protein clumping in motor neurons, protecting them from degeneration. 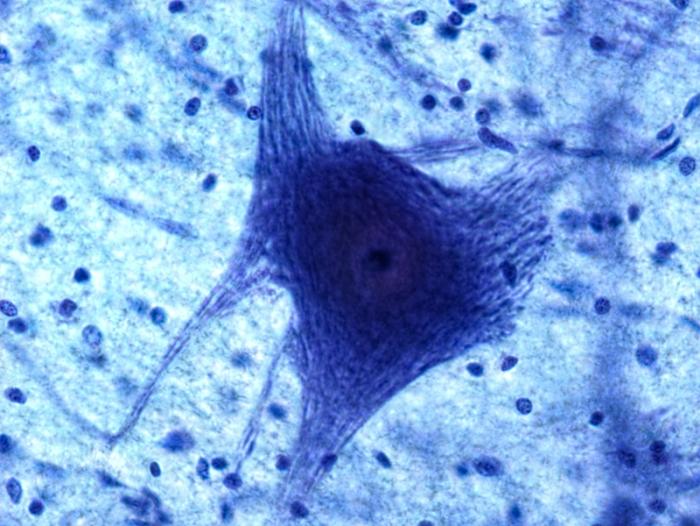 Researchers have found a way to halt protein clumping in motor neurons, which can stop them from degenerating.

Senior author Nikolay Dokholyan, Ph.D., the Michael Hooker distinguished professor of biochemistry and biophysics at the University of North Carolina (UNC) School of Medicine, and team publish their findings in the journal Structure.

Early symptoms of ALS include cramps, problems speaking and swallowing, muscle stiffness, and weakness in arm or leg muscles. These symptoms can progress rapidly, eventually leading to complete loss of voluntary muscle control and breathing difficulties.

According to the National Institute of Neurological Disorders and Stroke, in around 90-95 percent of ALS cases, the condition arises spontaneously with no clear risk factors.

The remaining 5-10 percent of ALS cases are inherited, and around 20 percent of these cases are down to mutations in a gene called superoxide dismutase 1 (SOD1), which lead to the development of protein clumps that are toxic to motor neurons.

Last year, Dokholyan and colleagues shed light on the toxicity of SOD1 protein clumping, after finding that a mutated version of the gene creates protein clumps of three, known as “trimers,” and these trimers killed lab-grown motor neuron-like cells.

For their new study, the researchers set out to find a way to stabilize SOD1 gene mutations, as a way of stopping protein clumps from forming and halting ALS development.

“The idea was that if we can stabilize SOD1 in the first place, we can potentially provide a way to prevent this disease at an early stage,” says study co-author Cheng Zhu, Ph.D., a postdoctoral researcher in Dokholyan’s lab.

Using computational modeling, the researchers tested a series of modifications to SOD1 in order to
pinpoint what might cause SOD1 to trigger or cease protein clump formation.

The models suggested that adding a phosphate group to SOD1 proteins – a process known as phosphorylation – may help stabilize them, and they decided to investigate this theory further.

To do so, the researchers developed a genetic mutation that simulated the addition of a phosphate group to lab-grown motor neuron-like cells that had a SOD1 mutation.

They found this stabilized SOD1 proteins and stopped them from forming protein clumps, which prevented motor neuron degeneration.

“The identified mutation mimics a natural process called phosphorylation, thus suggesting that there may be a natural, or endogenous, mechanism to stabilize SOD1 in cells and prevent the protein from forming toxic oligomers in people without disease.

Understanding the cellular mechanisms resulting in SOD1 phosphorylation not only offers insights about how cells respond to toxic SOD1 clumps, but will potentially offer insights into new pharmaceutical strategies aimed at promoting SOD1 phosphorylation. That is our immediate goal.”

“We know that this mutation stabilizes SOD1, and the hope is that we can find a drug that makes the protein act in this way. By slowly piecing together the larger story of how SOD1 acts, hopefully that can be useful in drug studies to try to get a handle on how to affect the behavior of this protein in a planned way.”

Read how the 2014 ALS Ice Bucket Challenge led to the discovery of the gene that contributes to ALS.