The cause of nonalcoholic fatty liver disease is complex and not completely understood. We now know that fat tissue is very active metabolically and has interactions and effects on tissues throughout the body. 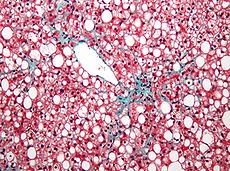 New research published in The Lancet has shown that a drug, currently used in the treatment of Type II diabetes, can be effective in clearing fatty liver disease from some patients.

The researchers from the University of Birmingham believe that the findings present the possibility of new therapies for patients with non-alcoholic fatty liver disease, for which there is no current licensed treatment.

The trial was the first of its type to look into the action of liraglutide in the treatment of non-alcoholic steatohepatitis.

The trial demonstrated that 48 weeks of treatment with liraglutide resulted in 4 out of 10 patients clearing evidence of NASH from their livers. This was much higher than the effect seen in patients receiving placebo (1 in 10) and met the pre-specified primary end-point.

Additionally, patients in the active treatment group showed a higher level of weight loss (over 5 kg) whilst receiving medication.

Liraglutide is manufactured and licenced by Novo Nordisk and is currently licenced for the treatment of Type II diabetes. It is administered in the form of an injection which the patient self-injects, which means the treatment could be administered at home.

Non-alcoholic fatty liver disease (NAFLD) describes a wide range of conditions caused by a build-up of fat within the liver cells, usually seen in people who are overweight or obese. It is the most common liver disorder in developed countries – affecting approximately 20% of the United States population and 25-30% of people in the UK.

Non-alcoholic steatohepatitis (NASH) is the more serious form of NAFLD and can ultimately increase the risk of total liver failure which means a transplant is required, but if one is not found, it will lead to death. It is often considered to be something of a ‘silent killer’ because most people feel well, unaware that they have a liver problem, until the disease is at an advanced stage.

The trial was led by the National Institute for Health Research (NIHR) Birmingham Liver Biomedical Research Unit (BRU) in conjunction with the Wellcome Trust and Novo Nordisk and other sites at universities in Nottingham, Hull and Leeds.

Professor Philip Newsome, the lead investigator from the University of Birmingham, explained, “Because there are no licensed treatments available for non-alcoholic fatty liver disease, there is a large unmet clinical need. It is becoming ever more important that we find a treatment as the occurrence of fatty liver disease continues to grow – hand in hand with the problem of obesity. This study provides confidence in the further exploration of this class of drugs in NASH.”

You must be eat a balanced and healthy diet and get regular exercise.And follow the treatment of fatty liver disease.