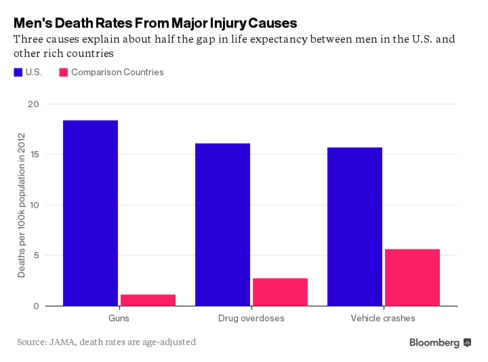 THURSDAY, Oct. 6, 2016 (HealthDay News) — The United States lags behind other advanced nations when it comes to infant mortality and the life expectancy of its citizens, according to a comprehensive review of global health statistics.

The health of U.S. citizens is specifically challenged by smoking, diabetes, high blood pressure, drug abuse and gun violence, said study co-author Dr. Mohsen Naghavi. He’s a professor with the Institute for Health Metrics and Evaluation at the University of Washington in Seattle.

The United States isn’t meeting the high expectations set by the country’s wealth and the amount it spends on health care, mainly because not all U.S. citizens benefit equally from their nation’s advantages, Naghavi said.

“This comes from inequality in access to health care, along with other social and economic factors,” he said.

Infant mortality in the United States amounted in 2015 to six deaths out of every 1,000 kids younger than 5, while the average for all high-income nations combined was about five deaths per 1,000, researchers said.

U.S. men and women also had poorer life expectancy, compared with the rest of the developed world.

By comparison, all high-income countries combined had an average 78.1 years of life expectancy for men and 83.4 years for women, the study reported. Years lived in good health averaged 68.9 for men and 72.2 for women.

These findings are part of the Global Burden of Diseases, Injuries and Risk Factors Study 2015, a scientific analysis of more than 300 diseases and injuries in 195 countries and territories.

The numbers show that the United States needs to rethink its approach to health care, said Dr. Prabhjot Singh. He is director of Mount Sinai’s Arnhold Institute for Global Health in New York City.

“We are investing in the wrong stuff, and we are paying for it with our lives,” Singh said.

Researchers found that drug abuse and diabetes are causing a disproportionate amount of ill health and early death in the United States, compared with other countries.

Singh suggested, to combat these health risks, the United States will have to go beyond its reliance on a “hospital-centric, drug-centric medical system.”

Diabetes is a good example of an ongoing health problem the United States is ill-equipped to fight, Singh added.

People need to eat healthy and get physical exercise to either control their diabetes or avoid it altogether. But to do that, they need to live in communities where healthy food is affordable and opportunities for activity are plentiful, he noted.

“This is not something that happens in a 15-minute clinic visit. You need to be in healthy places, part of communities that value health and invest in it through public health,” Singh said.

“When we look at the best-performing countries, they are making balanced investments in public health — investments in pathways for every individual to have the same opportunity for success,” he concluded.

The study, published Oct. 6 in The Lancet, also reports:

Even though U.S. life expectancy is not that of other wealthy nations, it continues to improve. A child born in the United States in 2015 can expect to live to age 79, while that child’s parent, born in 1990, had a life expectancy of 75.