A 34-year-old man left paralyzed after suffering a bullet wound has become the first person to have a neuroprosthetic device implanted in the brain region responsible for movement intention, allowing him to control a robotic arm with his mind. 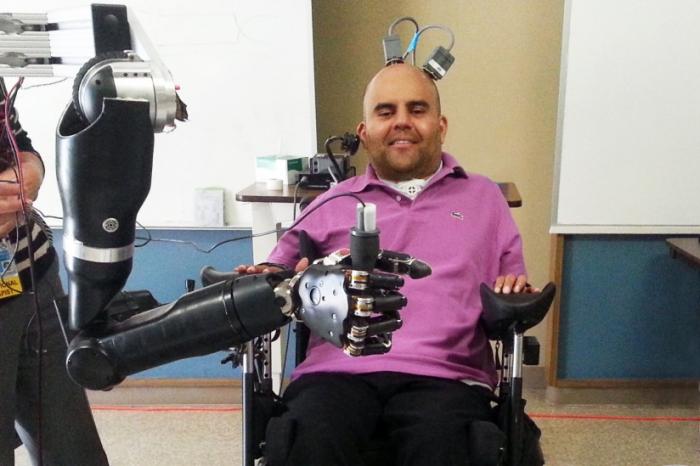 Thanks to the neuroprosthetic device, Sorta is able to control a robotic arm with just his thoughts.
Image credit: Spencer Kellis, Caltech

Erik Sorto, a father of two from California, endured a gunshot wound at the age of 21, severing his spinal cord and leaving him unable to move his arms and legs. Thanks to the new device, Sorto is now able to shake hands, pick up a beverage and even play “rock, paper, scissors.”

“I was surprised at how easy it was [to control the robotic arm],” says Sorto. “I remember just having this out-of-body experience, and I wanted to just run around and high-five everybody.”

The success of the neuroprosthetic device is the result of a joint project involving researchers from the California Institute of Technology (Caltech), Keck Medicine of the University of Southern California (USC) and the Rancho Los Amigos National Rehabilitation Center in Downey, CA.

In the journal Science, principal investigator Richard Anderson, James G. Boswell professor of neuroscience at Caltech, and colleagues explain how they implanted the device and how it works.

Previously, research into neuroprosthetics has focused on implanting devices in the motor cortex – the area of the brain that controls movement. Though this has allowed patients to possess some control over robotic limbs, results have been inconsistent, with motion often being severely delayed or shaky.

For this project, the team focused on the posterior parietal cortex (PPC) – the brain region that controls the intention of movement rather than movement itself.

Surgeons from Keck Medicine of USC implanted two small electrode arrays – 4 mm x 4 mm in size – into Sorta’s PPC. One electrode array controls reach, while the other controls grasp. Each array consists of 96 active electrodes that note the activity of each nerve cell in the PPC.

A cable connects the electrode arrays to a computer system that reads nerve cell activity in the PPC, decoding it to determine the brain’s intention of movement and control devices it is connected to – in this case, a robotic arm and a computer cursor.

The surgery – conducted on April 17th, 2013 – was a complex procedure and took 5 hours to complete, according to the team.

“These arrays are very small so their placement has to be exceptionally precise, and it took a tremendous amount of planning – working with the Caltech team to make sure we got it right,” says neurosurgeon Charles Liu, professor of neurological surgery and neurology and biomedical engineering at USC.

“Because it was the first time anyone had implanted this part of the human brain, everything about the surgery was different: the location, the positioning and how you manage the hardware,” he adds. “Keep in mind that what we’re able to do – the ability to record the brain’s signals and decode them to eventually move the robotic arm – is critically dependent on the functionality of these arrays, which is determined largely at the time of surgery.”

Sorta and the research team talk more about the procedure in the video below:

Though he was able to use his thoughts to move the robotic arm immediately, it took weeks of mind training to refine arm movements. Now, Sorta is able to carry out a number of tasks using the arm, such as picking up a beverage.

“He’s been able to do various things,” Andersen told The Washington Post. “He can play video games and do rock paper scissors, he can grasp objects. And of course he had a personal goal, which is to control the speed at which he drinks a beer, so we implemented that first.”

According to the Christopher & Dana Reeve Foundation, around 6 million people in the US are living with some form of paralysis – the equivalent to almost 1 in 50 Americans.

The success of the neuroprosthetic device so far has excited neurological researchers, representing another step toward helping patients with full or partial paralysis.

“We are at a point in human research where we are making huge strides in overcoming a lot of neurologic disease.

These very important early clinical trials could provide hope for patients with all sorts of neurologic problems that involve paralysis such as stroke, brain injury, ALS and even multiple sclerosis.”

The project is ongoing, with Sorto committing to another year of study.”This study has been very meaningful to me,” he says. “As much as the project needed me, I needed the project. It gives me great pleasure to be part of the solution for improving paralyzed patients’ lives.”

The National Institutes of Health, the Boswell Foundation, the Department of Defense and the USC Neurorestoration Center funded the study.

In December 2014, Medical News Today reported on a study published in the Journal of Neural Engineering, in which researchers revealed how a 52-year-old quadriplegic woman was able to control a robotic arm with her mind.

That study detailed similar techniques to those used in this latest research, though the electrode arrays were implanted into the patients left motor cortex rather than the PPC.