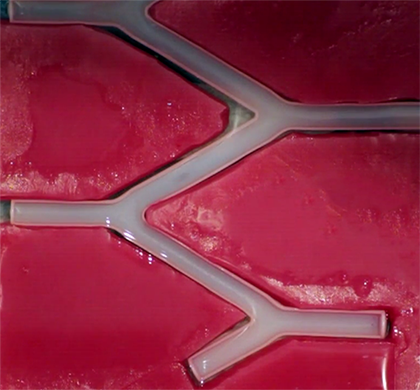 MRI machines allow doctors to look at hidden details inside our bodies, but soon they may be used to also deliver drugs in a highly targeted manner. Normally, a systemic medication traves along with blood’s natural currents, finding itself in parts where it is not needed while delivering only a small amount of the drug to the target destination. Tagging drugs with ferrous nanoparticles so that a magnet can pull on them toward a target is fairly easy these days. The real problem is managing to navigate through the powerful currents within blood vessels while imaging the particles as they swim along.

Researchers at Boston Children’s Hospital managed to do just that by manipulating various settings on a clinical MRI machine to optimize propulsion while maintaining a real-time view of the particle being moved around.

The hacking of the MRI machine involved minimizing how much 3D imaging is done, allowing the rest of the magnet’s time to be spent on pushing the drug particles. Moreover, the imaging is focused on seeing the particle rather than the nearby tissue, which in itself reduces how much time is spent on imaging over propulsion. Finally, the imaging gradients were adjusted so that they would push the particle in the wanted direction with sufficient force.

The result is that only 10% of the scanner’s energy is used for imaging, while 90% is directed at moving the particle.

Here’s a video showing a particle being moved through a simple maze of tubes using a commercial MRI machine: