One woman tried to lose weight with her boyfriend—and just about lost her mind. Here, experts explain why men lose weight so much faster than women, plus the best ways to try to slim down with your S.O. 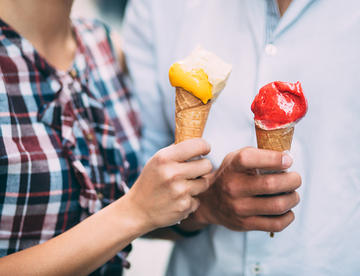 After a year spent flirting over candlelit dinners and skipping the gym for between-the-sheets sweat sessions, my boyfriend and I decided we really needed to lose the 15-plus pounds we had each packed on since our first date.

He cut his soda habit to just one bottle a day. I sipped water and green tea like it was my job. He ate takeout every day for lunch. I made all of my meals from scratch. On road trips, I noshed on almonds and carrots. He bought beef jerky, a bag of doughnuts, and an energy drink from a gas station. I ran about 20 miles a week; he said he’d get around to it. And he’s still losing weight faster than I am.

Yes, it’s infuriating. But it’s also biology. Between their higher levels of testosterone and increased muscle mass, guys are designed to make weight loss look easy. “Women will lose less weight, compared to men, even if they cut the same number of calories,” says Brian Quebbemann, MD, a bariatric surgeon with the Chapman Medical Center in California and president of The N.E.W. Program. “Men need more calories to supply energy to their muscles and other organs, which are larger, on average, than those of women.” Even if you and your BF are the same height, he’ll have more lean muscle mass, requiring the consumption of more calories, says Quebbemann. “What’s more, men have seven times the testosterone as women, which increases their metabolism independently from the muscle mass factor.” And women? We’re bathing in estrogen, which causes our bodies to glob on fat, especially around the hips, thighs, and butt.

If there’s any weight-loss lesson women should take from men, it’s that muscle revs your metabolism, says Wayne Andersen, MD, co-founder and medical director of the Take Shape For Life online health community. Plus, regular resistance training can actually increase women’s levels of testosterone and influence how the body hangs on to fat, says research published in the International Journal of Sport Nutrition and Exercise Metabolism. (Don’t worry, you won’t sprout a mustache!)

If your plate is as big as his, you might actually gain weight. After all, even if they’re the same height, weight, and age, women typically need fewer calories per day than do their male counterparts, says dietitian Tori Holthaus, RDN, LD, founder of YES! Nutrition. Listen to your own body to guide how much you need. Likewise, what foods he decides to eat shouldn’t determine your menu, she says. Even if you’re trying to lose weight together, it’s important to do it in a way that fits your tastes and preferences. That’s the only way it’s sustainable.

When his weight drops off faster than yours, it’s easy things to get competitive. Instead, consider his success your success, Holthaus says. In the end, the healthier he is, the longer he’ll be around (and the sexier he’ll look when he crawls in bed with you every night). “Cheer each other on for the small daily wins in your efforts to be healthier, and encourage each other if things get a little off-track,” she says.

When it comes to weight loss, fast isn’t always a good thing. Remember that the faster you lose weight, the greater the chances that you’re burning not only fat but calorie-torching muscle as well. So instead of trying to catch up to your guy’s weight-loss totals, aim to lose a maximum of about one to two pounds per week. That will guarantee that your weight loss is both healthy and sustainable. Do that, and after about six months, most women will find that they’ve actually lost a similar amount of weight to most guys, Andersen says.

You don’t need to be—and shouldn’t be—as lean as a guy! For optimum health, 12 to 18 percent of a man’s weight should come from fat. For women, that target balloons to 18 to 24 percent, Quebbemann says. Try to achieve the same body fat percentage as your boyfriend, and your health will suffer. “Women with less than 12 to 14 percent body fat content will often have irregular menstrual cycles,” he says. “Plus, body fat seems to have a substantial effect on emotional health, with women often suffering from depression when they ‘achieve’ extremely low body fat percentages.” You do you, ladies.