Black and Hispanic women in the U.S. are more likely to be diagnosed with late-stage breast cancer and less likely to survive the disease than white women, according to a new study published in the journal Cancer Epidemiology, Biomarkers and Prevention.

Among Asian and Pacific Islander women, late diagnoses were a bit more complicated. Pacific Islander and Filipino women were 20 to 60 percent more likely to receive a late-stage cancer diagnosis, while Chinese and Japanese women had a 30 to 40 percent lower risk of late-diagnosis than white patients. 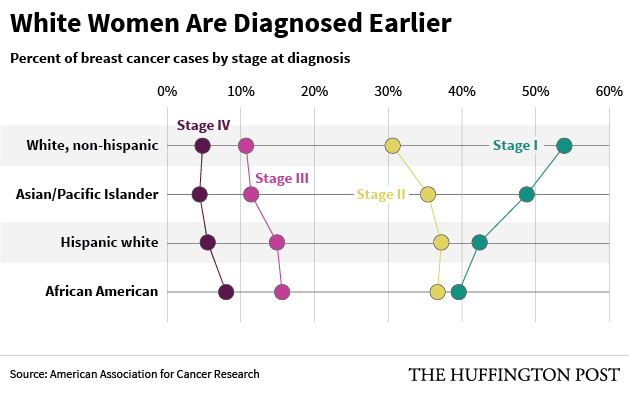 “We saw a consistent pattern of late diagnosis and not receiving recommended treatment for African-American women across all breast cancer subtypes,” lead study author Lu Chen, a researcher at the Fred Hutchinson Cancer Research Center at the University of Washington School of Public Health, told The Huffington Post.

Research has long shown that black patients receive worse health care and have more negative health outcomes than white patients, across almost every measurable metric of health. With breast cancer specifically, the advances the United States has made in education, treatment and post-cancer care over the past few decades haven’t translated into better survival rates across racial lines.

According to Chen, there are many layers to this discrepancy. For starters, advances in breast cancer survival rates are more prominent for early-stage disease and for certain subtypes of breast cancer, and minority women are more likely to be diagnosed with aggressive subtypes at advanced stages.

“We had expected to see some consistencies in the pattern of late diagnosis,” Chen said. “We think these disparities are likely to be driven by socio-economic factors.”

Access to and quality of health care and treatment are factors that could explain the stark difference in survival rates. In Chen’s study, for example, African-American and Hispanic patients were less likely to receive the full course of recommended treatments across every subtype of breast cancer. In contrast, Asian and Pacific Islanders of all ethnicities had similar rates of receiving appropriate treatments to white patients, across all the breast cancer subtypes.

The new study confirms previous research that reached similar conclusions about breast cancer dangers for minority women. According to a study published in the American Journal of Public Health in 2006, black, American Indian, Hawaiian and Hispanic women of Mexican, Puerto Rican and Central and South American descent all had in an increased risk of a late-stage breast cancer diagnosis compared to white women — though the black-white disparity was the most stark.

And a different study, published last year in the journal Cancer Epidemiology, found that the black-white breast cancer survival gap is growing. While the rate of breast cancer deaths was 17 percent higher for blacks than it was for whites in the early 1990s, by 2009 the gap had widened to 40 percent.

In cities, the disparity was even more stark. In Nashville, Tennessee, one of the worst cases, the survival gap is a staggering 111 percent.

Small changes are underway that may make a dent in disparities. The Affordable Care Act, for example, is expected to decrease the number of uninsured black patients from 20 percent to 11 percent by 2016. But generally, the new research is a sobering reminder of how much ground is left to cover.

The IUD Is Getting More Popular In America. Here’s Why

Moderate Alcohol Use Linked With Breast Cancer In Women

5 Myths About IUDs You Need To Stop Believing

More Sex May Help Fertility, And Not For The Reason You Think