IUD use among American women is on the rise after decades of declining popularity. New products and changing attitudes among physicians and patients are driving the trend, experts say. | BSIP/UIG Via Getty Images

A birth control method that works more than 99 percent of the time is making a comeback after all but disappearing from America in the 1980s and 1990s.

The intrauterine device, or IUD, was the contraceptive of choice for 6.4 percent of American women aged 15-44 from 2011 to 2013, according to a report published Tuesday by the Centers for Disease Control and Prevention. Though the IUD, a small, T-shaped device implanted in the uterus, is far behind more popular methods of birth control like the pill or condoms, the share of women using one nearly doubled from 2006 to 2010, and is dramatically higher than the less than 1 percent of women who had IUDs in the mid-1990s.

The Guttmacher Institute reports that 51 percent of pregnancies are unplanned, and 95 percent of those result from not using or misusing birth control — like forgetting to take the pill every day at the same time. Wider adoption of the IUD would lead to fewer unplanned pregnancies and abortions, according to the American College of Obstetricians and Gynecologists.

“The more you can take the user out of the equation — if she so desires — the more you’ll be able to prevent unintended pregnancy,” said Megan Kavanaugh, a senior research scientist and public health specialist at the Guttmacher Institute, which studies reproductive health. “More and more people are jumping on the IUD and implant bandwagon because it seems like they might be potentially appropriate to cover for these long periods of a woman’s life when she needs coverage.”

Decades have passed since the Dalkon Shield scandal of the 1970s, when an estimated 200,000 women were injured, many became infertile and about 20 died from infections related to that IUD. But new, safer products started coming onto the U.S. market from the late 1980s through the current decade. Medical societies have adopted policies in recent years recommending physicians consider IUDs and other long-acting contraceptives for more types of patients, including women who’ve never had a child and teenagers. And word-of-mouth combined with advertising and marketing by IUD manufacturers has increased consumer awareness.

The Affordable Care Act’s requirement that health insurance cover all types of birth control at no cost is expected to accelerate adoption of IUDs. The price for an IUD implantation is more than $1,000. 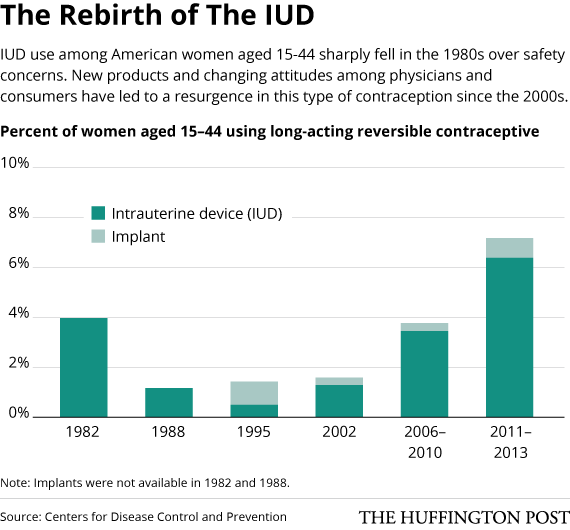 The IUD is almost as effective as sterilization, but it’s not permanent. After having the device implanted in a physician’s office, a woman doesn’t have to take any further actions to prevent pregnancy throughout the 3-to-10-year lifespan of the IUD. The device fails less than 1 percent of the time, compared to 9 percent for the pill, 18 percent for male condoms and 24 percent for the rhythm method, CDC data show.

Erin Stevens, 28, opted for an IUD in 2013 after a pregnancy scare. “I remember taking the test, and I literally just felt this dread,” she said. “I knew that was a sign to myself that I better do something different.” Stevens and her husband, Brad, who live near Louisville, Kentucky, in Jeffersonville, Indiana, aren’t planning to have children, she said.

Still, Stevens went off birth control pills, which she often forgot to take. Her sex drive spiked, which just upped the risk of going without contraception. “The pull-out method isn’t always the best method,” she said. (Withdrawal has a 22 percent failure rate, according to the CDC.) So far, she’s pleased with her IUD, a Mirena device made by Bayer that uses hormones. Her periods are virtually gone, as is the anxiety about remembering to take her pill — and about getting pregnant, she said. “I know that we’re good for the next five years.” 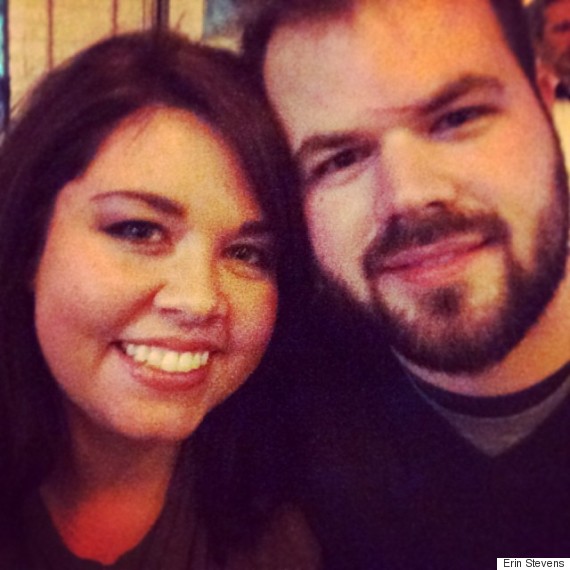 Mirena has been available in the United States since 2000 and is designed to work for five years. Bayer introduced a smaller IUD called Sklya in 2013, meant to be used for three years. Both use hormones, but Skyla, unlike Mirena, is approved by the Food and Drug Administration for women and girls who have never had a child. Another IUD without hormones, called ParaGard and made for 10 years of use by women who have or have not given birth, has been around since 1988 and is sold by Teva.

Long-acting reversible contraceptives have several obvious advantages over other forms of birth control, like the pill and condoms. An IUD or implant is always in place, and women don’t have to take extra steps or rely on their partners to avoid becoming pregnant. Some women experience lighter or no periods after their IUDs have been in place for several months.

There are drawbacks, of course. Some women experience discomfort and irregular bleeding during the first few months, or even longer. In rare cases, an IUD can become dislodged. The device doesn’t prevent sexually transmitted infections. A woman who decides she wants to become pregnant must have the device removed. And IUDs must be implanted inside the uterus, which requires a typically painful procedure that involves pushing the device past the cervix.

“The worst part was that I would literally feel her turning it to adjust it in my abdomen. Like, if you’ve seen the movie where the ugly alien shoots out of somebody’s stomach — that’s it,” Stevens said. The five-minute procedure hurt worse than the six hours she spent getting a tattoo across her rib cage, she said. But, she added, it was worth it.

Women in Stevens’ age group are driving the resurgence of IUDs, as well as hormonal implants, a plastic device placed in the arm that delivers hormones to the body for up to three years. Together, these birth control methods are called long-acting reversible contraceptives, and more than 11 percent of women aged 25 to 34 are now using them, the CDC report says. Women with IUDs make up most of this group. IUD use among women who have never had a child rose almost tenfold between 2006-2010 and the most recent CDC survey in 2011-2013.

That’s a reflection of the changing attitudes among women and their doctors, Kavanaugh said. “We’ve definitely seen increased awareness and education among providers that these methods are appropriate for women at all stages of their reproductive career, not just women who are spacing or limiting their births, the women that were traditionally seen as appropriate candidates for the method,” she said.

This is more true of gynecologists and family planning specialists who are exposed to the latest research and more familiar with different kinds of birth control than it is with pediatricians and general practitioners, Kavanaugh said. “That is slowly changing. It just takes time,” she said.

In 2011, the American College of Obstetricians and Gynecologists adopted new guidelines encouraging physicians to discuss IUDs with patients. The American Academy of Pediatrics followed last year by endorsing IUDs as a first-line contraceptive option for teenage girls.

Physician organizations like these, and doctors themselves, are changing the way they think about long-acting reversible contraceptives because more studies have shown they are safe and effective for women at various ages, said Laura MacIsaac, associate professor of obstetrics, gynecology and reproductive science at the Icahn School of Medicine at Mount Sinai in New York.

MacIsaac said that in her experience, memories of the Dalkon Shield recall in 1974 and the FDA call for all women to stop using it in 1983 don’t influence patients’ decisions. But there are doctors who remain skeptical, she said.

“There was a backlash against all IUDs,” she said. “It still lingers, especially with older physicians.”

That’s gradually diminishing, especially as evidence emerges that IUDs are also helpful as a treatment for women with heavy and painful periods, she said.

As more physicians talk about these options and become adept at implanting IUDs and comfortable giving them to younger women, single women and women who haven’t had kids, the number of patients using them rises and word spreads, Kavanaugh said. “More women know that they’re available,” she said.

Bayer has targeted educational and training resources to gynecologists and family planning specialists, but not primary care doctors or pediatricians, said Paul Bedard, general manager of women’s health at the company. Bayer and Teva also heavily advertise their products.

“When we’ve done those activities, we’ve seen the awareness of a product like Mirena, now of Skyla, increase over time, and we think that contributes to having more discussions with their physicians,” Bedard said.

That was Stevens’ experience, she said. “When I first heard about it was on a Mirena commercial. And I remember thinking, ‘God, I would love to have that.’”

The Affordable Care Act rule that health plans cover contraceptives without any copayments has been in place since 2012 — and benefited Stevens — but it has not been in place long enough to have had an effect yet, MacIsaac said. “That will happen. I just think it hasn’t happened yet,” she said. Removing the cost barrier to long-acting reversible contraceptives is bound to increase their use, she said.

Within a decade, MacIsaac predicts as much as one-quarter of American women will use IUDs, akin to the rates in European countries, where the Dalkon Shield’s problems didn’t frighten women and doctors away, she said.

“That’s what I hope, because it helps women balance all their different goals and opportunities and responsibilities,” MacIsaac said.

5 Myths About IUDs You Need To Stop Believing

Mental Illness Is A Much Bigger Problem For The Poor, New Study Shows