behavior depending on whether day or night is approaching. Now, a new study shows that

also the color of ambient light. 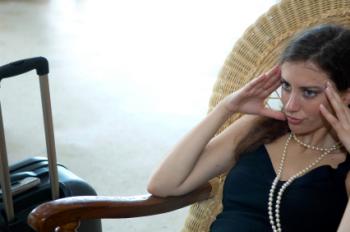 The researchers say, in theory, color of light could be used to manipulate our body clock, which could

be useful for travelers wanting to minimize jet lag.

In the journal PLOS Biology, researchers from the University of Manchester in

large changes in light intensity that occur as dawn and dusk approach.

But the color of light also changes during these twilight transitions, so the team

wanted to investigate if this also features in the function of the body clock.

affect the body clock in mammals, as Dr. Timothy Brown, of Manchester’s Faculty of Life

brightness, but using new experimental tools and a psychophysics approach we were

For the study, the researchers set up their instruments at the top of one of the

in the sky over the course of a month.

Body clock appears to sense that twilight is bluer than daylight

The data confirmed that light changes not only in intensity but also in color. As the

sun rises and sets, the twilight is bluer than during the full light of day.

they could see what happened as mice were exposed to it.

As expected for nocturnal animals, after a few days of living under the artificial

sky, the mice’s highest body temperatures occurred just after dusk, when the sky became a

darker blue, indicating that their body clock was working correctly.

the light and not its color changed, the mice became more active before dusk, showing

their body clock was not properly aligned to day-night.

In earlier tests, the team had recorded electrical activity in the mice’s brain clocks

as they were exposed to different colors of light. They found that many of the brain

“In sum, our data reveal a new sensory mechanism for estimating time of day that

should be available to all mammals capable of chromatic vision, including humans.”

Dr. Brown says he and his colleagues are excited about their findings because they

believe they also apply to humans:

“So, in theory, color could be used to manipulate our clock, which could

be useful for shift workers or travelers wanting to minimize jet lag.”

In December 2014, Medical News Today learned of a study led by the St. Louis

University in Missouri that revealed a potential way to control the body’s internal clock. By targeting a

protein called REV-ERB with a drug called SR9011, the researchers found they could