It may sound like something from Mary Shelley’s Frankenstein, but the possibility of the world’s first human head transplant is very real. In December 2017, Italian neuroscientist Dr. Sergio Canavero plans to perform the procedure alongside a team of Chinese surgeons, led by Dr. Xiaoping Ren – who to date, has performed around 1,000 head transplants on mice. 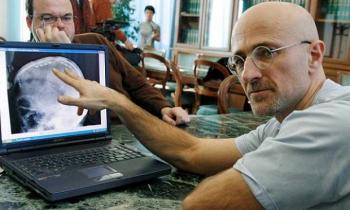 The procedure – named HEAVEN-GEMINI – will take around 150 surgeons and nurses approximately 36 hours to complete and will cost around $11 million.

Dr. Canavero, of the Turin Advanced Neuromodulation Group (TANG) in Italy, first announced his proposal for the HEAVEN-GEMINI project back in July 2013.

Unsurprisingly, his proposal has been met with much criticism, with some scientists branding Dr. Canavero as “nuts.”

However, Dr. Canavero is not the first surgeon to delve into the world of head transplants. In 1970, the late American neurosurgeon Dr. Robert White was the first to transplant a monkey’s head onto another monkey’s body.

While the recipient monkey had the ability to see, hear, taste and smell following the procedure, lack of sufficient technology meant the animal’s spinal cord nerves were not properly fused to its head, leaving it paralyzed. In addition, the animal’s immune system rejected the donor head, causing it to die 9 days later.

While Dr. Canavero admits that spinal cord fusion (SCF) and the possibility of head rejection are still key challenges for the HEAVEN-GEMINI project, he claims that recent animal studies indicate they can be overcome.

“The greatest technical hurdle to such endeavor is of course the reconnection of the donor’s and recipient’s spinal cords. It is my contention that the technology only now exists for such linkage,” he said in a paper published in Surgical Neurology International.

Even if the procedure itself is feasible – as Dr. Canavero believes – some questions remain: what would be the benefits of a head transplant? And is the body able to fully recover from such a traumatic event? Medical News Today spoke to Dr. Canavero to get some answers.

Removing a healthy head from a ‘body without hope’

“We’re going to remove one head under deep hypothermia and reinstall it on a new body. Of course, we are talking about a head with a perfectly healthy brain, but with an alien body – so a body without hope,” Dr. Canavero told MNT.

Both the recipient’s head and donor body will be put into hypothermia mode for around 45 minutes in order to limit any neurological damage that may occur from oxygen deprivation.

The head will be removed from the donor body using an “ultra-sharp blade” in order to minimize spinal cord damage – a process the Italian surgeon says is key for successful SCF.

Then comes the trickiest part: attaching the recipient’s head to the donor body, which involves the complex SCF process. In his original paper, Dr. Canavero explained that the chemicals polyethylene glycol or chitosan will be utilized to encourage the fusion, before the muscles and blood supply are sutured.

While many scientists have raised concerns about the feasibility of the SCF process, Dr. Canavero told MNT that he is not worried.

“The possibility of fusing a spinal cord has already been achieved 50 years ago,” he said. “What is incredible is that no one took any notice at the time because the guy who really pulled it off was an American functional neurosurgeon who made this incredible, astounding observation that whenever you cut the spinal cord with a minimally traumatic severance and you wait long enough – that’s the trick, not 1 day, not 1 week, not 1 month, but several months – then animals start reworking.”

“As far as SCF is concerned, with the data, we’re already there,” he added. “And what really accrued over the past 50 years, which has been lost incredibly up until now, will simply help us accelerate the process – nothing more and nothing less.”

After surgery, the recipient will be placed in a coma for 3-4 weeks. This is to ensure neck movement is avoided, allowing time for the new nerve connections to fuse together.

During the coma period, the recipient will also be subject to electrical stimulation through implanted electrodes; it is hoped this will give SCF a boost.

Head transplant ‘is a failure of medicine’

The words “body without hope” are central to the reasons behind the HEAVEN-GEMINI project; it aims to help people who have untreatable neurological or muscle-wasting diseases that have left them completely paralyzed from the neck down.

If successful in curing such conditions, one might hail head transplantation as a medical breakthrough, but Dr. Canavero told MNT that he perceives the procedure in another light:

“It will be about curing incurable neurological disorders for which other treatments have failed big time, so gene therapy, stem cells – they all just came to nothing. We have failed despite billions of dollars being poured into this sort of research.

So actually, head transplant or body transplant, whatever your angle is, is actually a failure of medicine. It is not a brilliant success, a brilliant advancement to medical science. When you just haven’t tackled biology, you don’t know how to treat genes, you don’t really understand, and you really need to resort to a body transplant, it means that you’ve failed. So this must not be construed as a success of medical research.”

Still, there is no doubt that if the procedure works, it could potentially help people all over the globe who are living with paralysis. And one individual who firmly believes this is 30-year-old Russian man Valery Spiridonov.

On the next page we look at the criticism the HEAVEN-GEMINI project has received and the ethical concerns it has raised.