Researchers from the UK and Denmark have discovered a protein that encourages breast cancer to spread to the bone – a finding that could pave the way for treatments that halt progression of the disease. 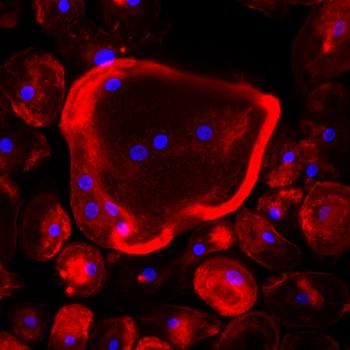 Breast cancer is the most common cancer among American women after skin cancer. This year, it is estimated that more than 231,000 new cases of invasive breast cancer will be diagnosed in the US.

In this latest study, recently published in the journal Nature, study co-leader Dr. Alison Gartland, of the University of Sheffield in the UK, and colleagues found that a protein called lysul oxidase (LOX) drives the spread of breast cancer cells to the bone.

The team says finding a way to block the activity of LOX may lead to new ways to prevent this type of secondary cancer in patients with breast cancer.

“This is important progress in the fight against breast cancer metastasis and these findings could lead to new treatments to stop secondary breast tumors growing in the bone, increasing the chances of survival for thousands of patients,” says Dr. Gartland.

LOX prepares bone for the arrival of cancer cells

They found that when breast cancer cells are deprived of oxygen, they release high levels of LOX. This protein makes holes in the bone of breast cancer patients as a way of preparing it for the arrival of cancer cells.

“We show that these lesions subsequently provide a platform for circulating tumor cells to colonize and form bone metastases,” the authors explain.

In another part of the study, the team found that introducing LOX to tumor-free mice also led to bone damage. However, they found an existing drug called bisphosphonate – used to treat bone diseases such as osteoporosis – prevented such damage in these mice.

As such, the authors suggest that administering similar treatments to patients with breast cancer could stop the disease spreading to the bone.

Commenting on the findings, study co-leader Dr. Janine Erler, of the University of Copenhagen in Denmark, says:

“Once cancer spreads to the bone it is very difficult to treat. Our research has shed light on the way breast cancer cells prime the bone so it is ready for their arrival. If we were able to block this process and translate our work to the clinic, we could stop breast cancer in its tracks thereby extending patients’ lives.”

The researchers say their next step is to determine how LOX interacts with bone cells to drive cancer metastasis, which will bring us closer to finding drugs that stop the process. “This could also have implications for how we treat other bone diseases too,” adds Dr. Gartland.

Earlier this month, Medical News Today reported on a study published in the British Journal of Surgery, which suggests women with hereditary breast cancer are at no higher risk of poor treatment outcomes than breast cancer patients without a family history of the disease.