A study of monkeys finds that infection with Zika virus protects against future infection and clears from the body quite quickly – within around 10 days. However, in pregnancy, the virus can take three to seven times longer to clear. 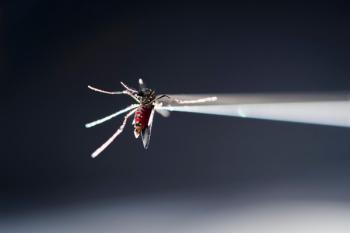 The Zika virus spreads to people primarily via the bite of an Aedes-infected mosquito – the same species that spreads dengue and chikungunya. The photo shows a blood-filled mosquito held under a microscope at a research lab in the University of Wisconsin-Madison.
Image credit: Jeff Miller/UW-Madison

In the journal Nature Communications, researchers report how they are establishing rhesus macaque monkeys at the Wisconsin National Primate Research Center as a model for researching the progress of Zika virus infections in people.

They note that what they have shown in the monkey model mirrors much of what has been observed in studies of humans.

Study leader David O’Connor, a pathology professor at the University of Wisconsin-Madison, says:

Zika virus spreads to people primarily via the bite of an infected Aedes mosquito – the same species that spreads dengue and chikungunya. The virus can also be passed on through sexual contact, and a pregnant woman can pass it to her fetus.

In many people, Zika infection causes no symptoms, while others may suffer a mild illness for a few days, with raised temperature, rash, joint pain, or conjunctivitis (itchy or sore eyes).

“We have good news for most people: If you are not pregnant and not at risk of becoming pregnant, you probably don’t need to be worried about Zika. But my concern for Zika virus in pregnancy is much higher now than it was 6 months ago.”

Few people infected with Zika need to go to the hospital, and they very rarely die of it. For this reason, many people may not even realize they are, or have been, infected.

However, if a woman is infected with Zika when she is pregnant, there is a chance her baby will be born with severe defects, including microcephaly, a condition where babies are born with smaller-than-normal heads and often have smaller brains that may not have developed properly.

The researchers infected monkeys with the strain of Zika responsible for the epidemic in South America that first became apparent in 2015. They found when they exposed those same monkeys to the same Zika strain 10 weeks later, they did not become infected.

Prof. O’Connor says the finding is good news for vaccine design, because:

“It suggests the sort of immunity that occurs naturally is sufficient. If you can mimic that in a vaccine, you’ll likely have a very successful vaccine.”

The researchers found after becoming infected with Zika, non-pregnant monkeys – that is non-pregnant females and all the males – were found to be free of the virus within 10 days.

However, the story was quite different for pregnant monkeys. Once they became infected with Zika, the virus persisted for 30-70 days.

One possible explanation for Zika lingering in the pregnant monkeys is that their immune system is not as strong and it takes longer to eliminate the virus.

But another, more provocative explanation is that the virus stays longer in pregnant monkeys because it is infecting the fetus, and what the researchers were seeing was the virus shedding from the fetus back into the mother’s blood.

Should this mother-fetus infection cycle prove to be the reason for the prolonged infection in pregnancy, then measuring the viral load of a pregnant woman infected with Zika every 1 or 2 weeks could be a noninvasive – and therefore less risky – way to assess the likely degree of damage to the fetus.

“If a pregnant woman comes into a clinic with Zika virus, but a week later shows no more evidence of infection, that could be a good indication that the fetus is unlikely to be affected.”

Learn about a portable, rapid diagnostic test for Zika that could reach clinical use in months.