A new study led by researchers from Taiwan finds the effects of concussion may differ between men and women, with women experiencing more persistent working memory impairment. 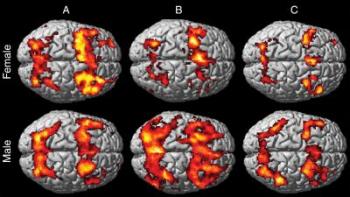 Concussion, also referred to as mild traumatic brain injury (MTBI), is defined as a temporary loss of normal brain function as a result of a head injury. Symptoms can include headache, sleep impairment, fatigue, poor coordination, loss of memory, poor concentration and changes in mood.

While the majority of people fully recover from concussion within 3 months, around 10-15% continue to experience complications.

Increasingly, studies have investigated the long-term effects of concussion and have produced some worrying results. In February 2013, for example, a study found concussion can cause abnormal brain wave activity and poor memory decades after injury, while another study identified damage to the brain’s gray matter in patients with concussion 4 months after injury.

What is more, studies of amateur and professional athletes – who are most prone to concussion due to their involvement in contact sports – have indicated that concussion is more common among female athletes than male athletes.

According to lead author of this latest study, Dr. Chi-Jen Chen, of the Taipei Medical University Shuang-Ho Hospital and the Chia-Yi Hospital – both in Taiwan – women are also more likely to seek medical attention for persistent symptoms after concussion.

“We started to wonder whether there might be differences in MTBI outcomes between men and women,” says Dr. Chen.

Persistent reduction in working memory activity among women with concussion

Dr. Chen says the team focused on working memory – the brain system responsible for processing and storing short-term information – because working memory impairment is a common complaint after concussion.

“Since working memory is important for a wide variety of cognitive skills, compromised working memory could have significant effects on everyday life,” adds Dr. Chen.

All participants underwent fMRI 1 month after injury, and follow-up fMRI scans were conducted 6 weeks later. The working memory tasks included a digit span test, which assesses the ability to remember a sequence of numbers, and a continuous performance test (CPT), which measures an individual’s sustained and selective attention.

What is more, women with concussion were found to have lower scores on the digit span tests than women in the control group.

“These findings provide evidence that female gender may be a risk factor for working memory impairment after MTBI, If so, more aggressive management should be initiated once MTBI is diagnosed in female patients.”

Dr. Chen adds that since fMRI has the ability to monitor working memory activity in the brain, it could be added to treatment strategies for women with concussion, though he stresses further research is needed to confirm the team’s findings.

While popular notion holds that strict rest is the best treatment for concussion, a study reported by Medical News Today in January claims it may actually do more harm.