Parkinson’s disease, a common neurodegenerative disease, more common in the elderly, a major impact on quality of life. 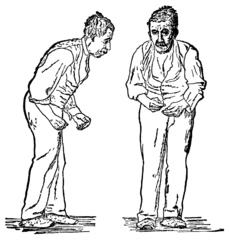 “Although this does not imply causation, our results suggest that weight and BMI are important clinical biomarkers and that data on weight and BMI should be collected even in early PD”, the team writes in JAMA Neurology.

The patients were participants in a large clinical trial and had been recruited within 5 years of their PD diagnosis. Most (76.6%) of the 1673 patients had a stable BMI across seven visits during 72 months of follow-up, and these patients experienced an increase (worsening) in total and motor UPDRS scores, of about 22 and 12 points, respectively.

BMI at the time of study enrolment did not influence progression. Indeed, the group with a decreasing BMI contained more patients who were obese at baseline than the other groups did. Patients with decreasing BMI were also more likely than patients in the other groups to be taking levodopa only, and at a higher dose. However, the association between BMI changes and disease progression remained after accounting for these variables.

Just 76 patients died during follow-up, so the team did not find a statistically significant association between BMI changes and mortality after accounting for confounders, but it did appear to follow a similar pattern.

The researchers believe they have identified a subtype of PD, characterised by decreasing BMI and fast progression.

“This subtype might represent a more severe, hypermetabolic form of PD, or it might be a subtype of PD in which the patient has greater gastrointestinal autonomic symptoms, reduced appetite, and reduced oral intake”, they suggest.