Amblyopia, or “lazy eye,” affects around 2-3 in every 100 children in the US, making it the most common cause of visual impairment in childhood. But a new study suggests there may be a simple treatment option for the condition that children are unlikely to object to: watching movies. 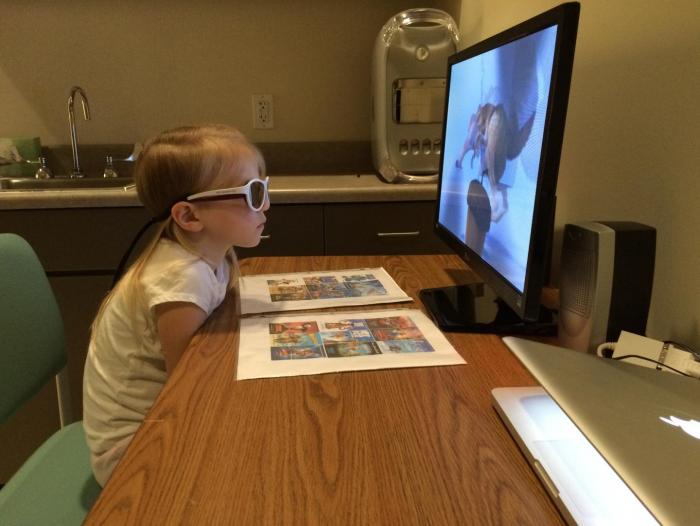 Researchers found that watching 9 hours of dichoptic movies over 2 weeks led to a significant improvement in vision for children with lazy eye.
Image credit: Retina Foundation of the Southwest

Lead investigator Dr. Eileen E. Birch, PhD, of the University of Texas Southwestern Medical Center and the Retina Foundation of the Southwest, TX, and colleagues publish their findings in the Journal of the American Association for Pediatric Ophthalmology and Strabismus.

Amblyopia is caused by any condition that stops an eye from focusing clearly. A common cause is when one eye is unable to focus as effectively as the other, through nearsightedness, farsightedness or if one eye has more astigmatism – the inability to focus on far or near objects due to the abnormal shape of the cornea.

Strabismus can also be a cause of amblyopia, whereby both eyes are misaligned, as can cataract – a clouding of the lens that can cause blurred vision.

The most common form of treatment for amblyopia among children is the placement of a patch over the stronger eye for several weeks or months, forcing the weaker eye to be used instead. This treatment helps vision-related parts of the brain develop more effectively, stabilizing eyesight.

However, Dr. Birch and colleagues say there is an increasing amount of research investigating the use of dichoptic therapy for the treatment of amblyopia, which involves presenting different images to each eye individually.

Dichoptic therapy is usually combined with perceptual learning tasks or games. While research has shown such therapy to be effective for improving vision in children with amblyopia, Dr. Birch and her team note that children often become bored of these tasks or find them too complicated, and home-based compliance to the treatment is low.

With this in mind, the team investigated the efficacy of a potentially more fun and engaging approach to dichoptic therapy among children: watching popular animated movies.

Improvement in vision after just 9 hours of dichoptic movie viewing

The researchers enrolled eight children with amblyopia between the ages of 4-10 years, and the children were required to watch three dichoptic movies each week for 2 weeks on a passive 3D screen while wearing 3D cinema glasses.

During the movies, each eye was shown an image of abnormally shaped blobs that veiled different sections of the film; the blobs viewed by one eye were an inversion of the blobs viewed by the other eye, allowing the children to see the screen with binocular vision, whereby signals from both eyes reach the brain.

She notes that in comparison, 120 hours of patching treatment normally only results in one line of improvement in visual activity among children with amblyopia who have already been treated with glasses for 12-16 weeks.

While the team says further research is required to determine how long improvements in visual activity last with dichoptic treatment involving movies, the early results are promising. Dr. Birch adds:

“If these preliminary results are confirmed in a controlled clinical trial, passive viewing of dichoptic feature films could be useful as a primary, supplemental, or maintenance treatment for amblyopia.”

In 2013, Medical News Today reported on a study by researchers from McGill University in Canada that suggested the video game Tetris could help treat adults with amblyopia.