A new study suggests a combination of health warning images and text on cigarette packets is more likely to drive a greater appreciation of the dangers of smoking among young adults than text warnings alone. 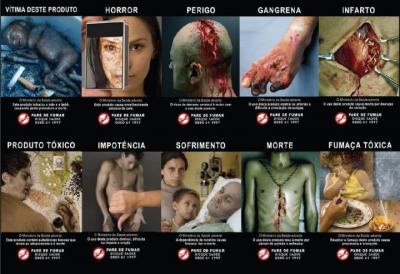 Researchers found that graphic health warning labels on cigarette packets – like these from the Brazilian Health Ministry – are more effective for increasing knowledge about the health consequences of smoking.
Image credit: Public domain via Wikimedia Commons

Study authors Renee E. Magnan, PhD, of Washington State University, and Linda D. Cameron, PhD, of the University of California-Merced, publish their findings in the Annals of Behavioral Medicine.

As part of the 2009 Family Smoking Prevention and Tobacco Control Act, the US Food and Drug Administration (FDA) published a final rule in 2011 requiring tobacco companies to include color graphics on cigarette packets warning consumers of the negative health implications of smoking.

In August 2012, however, this rule was overturned by the government after it was challenged by several tobacco companies, who claimed such graphic warnings would violate the tobacco industry’s right to free speech.

Though this decision was upturned by the US supreme court in 2013, giving the FDA the go-ahead for enforcing graphic warnings on cigarette packets, it is unclear when – or if – it will happen.

Numerous studies have suggested that graphic health warnings on cigarette packets – such as those showing smokers dying in hospital beds and diseased body parts – are more like to help smokers quit the habit than text-only warnings. According to Magnan and Cameron, however, few studies have investigated how much adults learn from these warnings.

To find out, the researchers surveyed two groups of smoking and nonsmoking adults aged 18-25 – some of whom had been recruited through a national website survey service, and some of whom took part in the survey as part of an undergraduate psychology course.

All participants were shown a variety of health warning labels on cigarette packets stating the negative consequences of smoking – such as lung cancer, heart disease, stroke and eye disease – either through text or a combination of text and images.

Subjects were then asked to rate how much each warning label influenced their understanding of the health consequences of smoking, whether it increased their knowledge of smoking-related health conditions, whether it evoked worry, and whether it discouraged them from smoking.

The results of the survey revealed that participants in both groups reported greater understanding and knowledge of the health implications of smoking from warning labels containing both images and text than text-only warning labels, as well as greater worry about health consequences and greater discouragement from the habit.

The researchers found that only two labels containing both images and text – one depicting impotence though a limp cigarette in an individual’s hand, and one depicting prolonged illness through an IV needle in a person’s skin – produced the same levels of understanding as their corresponding text-only labels.

Magnan and Cameron say their findings indicate that creating more informative health warning labels on cigarette packets through the use of images may cause people to worry about the health consequences of smoking and may even encourage them to quit.

“Although this is a preliminary investigation, from a policy perspective, these outcomes suggest that focusing on deriving greater understanding and knowledge from such labels may have more impact in terms of both motivational and emotional responses.

Importantly, however, these labels are only a small piece of what should be a larger campaign to educate the public on the dangers of smoking.”

Last month, Medical News Today reported on the release of the fifth edition of The Tobacco Atlas, in which experts claim the tobacco industry is using a “well-resourced array of tactics” to prevent global tobacco control.