A new study shows that at levels found in typical urban environments, ultrafine airborne particles can

alter heart function within minutes of being breathed in. 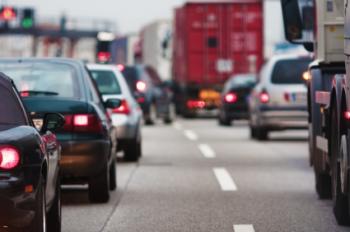 Higher levels of ultrafine particles, such as near dense road traffic, resulted in

heart function changes after only 5 minutes.

Researchers from the Helmholtz Zentrum München in Germany and the University of Rochester, NY, report their

findings in the journal Particle and Fibre Toxicology.

liquid droplets whose size is linked to their potential for harming health.

When describing air pollution, the US Environmental Protection Agency (EPA) distinguishes between coarse and

Coarse particles, such as those found near roadways and dusty industries, are larger than 2.5 micrometers (µm) and smaller

than 10 µm (commonly referred to as PM10); 10 µm is about one fifth of the thickness of human hair.

as a result of forest fires or when gases from power plants, industrial processes and motorized vehicles

react in the air.

heartbeat, nonfatal heart attacks, chronic bronchitis, aggravated asthma and other illnesses, including some

than 0.1 µm (PM0.1). Particles of this size are small enough to enter the bloodstream, with the potential to

damage a number of internal
systems that may be inaccessible to larger particles.

Lead author Prof. Annette Peters, head of the Epidemiology research program at the German Center for

diagnosed either with impaired glucose tolerance (IGT) or type 2 diabetes.

recorded electrocardiograms (ECGs) of their heart activity as they went about their day-to-day lives.

As well as the data from the individual devices, the researchers obtained particulate matter measurements

southwest of Bavaria in Germany.

When they analyzed the results, the team found links between ultrafine particle levels and changes to heart

“Elevated concentrations of ultrafine particles, e.g. in dense road traffic, led to a change in

heart rate variability of the participants after only 5 minutes.”

The researchers also confirmed what other studies had found, for instance, that fine particles over the

course of an hour – and noise – are linked to impaired heart function.

Prof. Peters says they were alarmed by the results because ultrafine particles are generally everywhere in

the environment and pose health risks for all of us, “but especially for people who already have an elevated

risk for cardiovascular disease, such as the individuals with diabetes in this study.”

She explains that the harmful effects of fine particles have already been established. In their study, they

found evidence of potential harm at levels below the current EU threshold, which has been in place for 10

However, due to lack of clear evidence, there is currently no threshold for ultrafine particles. Prof.

Peters and colleagues hope this study will help to change this:

“We hope that with our data, we can substantiate the demands for threshold limit values and

environmental standards in the future.”

According to the EPA, ultrafine particles “are not specifically regulated but have a strong link to

combustion and therefore are garnering special attention.” In urban areas, sources of combustion gases include

Meanwhile, a recent BMJ review that analyzed 100 studies from 28 countries on the health effects of air pollution has established a link between short-term

exposure to particulate matter and stroke. The researchers from Edinburgh University in the UK found stroke

risk rose in line with increasing concentrations of both fine and coarse particulate matter.