Ovarian cancer is a gynecologic cancer in a higher mortality rate, early onset with no obvious symptoms, it can not easily be found. 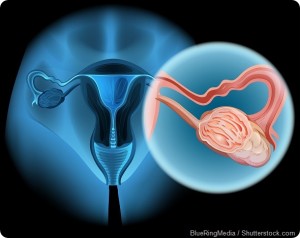 Screening appears to reduce mortality due to ovarian cancer, according to the results of The United Kingdom Collaborative Trial of Ovarian Cancer Screening (UKCTOCS) trial published in the Lancet yesterday.

UKCTOCS, one of the largest ever randomised trials, found that ovarian cancer screening reduced ovarian cancer mortality by an estimated 20% after a median follow-up of 11 years. Longer follow-up is needed to verify the results and assess whether screening the general population would be cost effective.
Ovarian cancer is associated with a high mortality rate, not least because the non-specific, or absence of, symptoms during early stages of the disease means that it is only diagnosed at an advanced stage. Consequently, it is more difficult to treat and 60% of patients die within five years of diagnosis. The UKCTOCS trial was designed to investigate whether this could be improved through screening.

The trial recruited over 200,00 post-menopausal women not considered to be at particular risk of developing ovarian cancer, ie., had no family or personal history, from 13 NHS centres in England, Northern Ireland and Wales.

The women were randomly assigned to undergo annual multimodal screening (MMS; serum CA125 levels interpreted using the risk of ovarian cancer algorithm), annual transvaginal ultrasound screening (USS), or no screening. Screening was conducted from 2001 to 2011 with patient follow-up until 31st December 2014.
The median follow-up was 11 years, and more than 1200 ovarian cancers were diagnosed. Analysis of the results showed that ovarian cancer mortality over up to 14 years was reduced by 15% with MMS and 11% with USS, compared with no screening.

The overall average mortality reduction through screening was 20%; during years 7 to 14 this increased to 28%. This is comparable to the reduction in mortality achieved with breast cancer screening in clinical trials (15 to 25%). It was estimated that 641 women would need to undergo MMS in order to prevent one death from ovarian cancer death over 14 years.

These results from UKCTOCS provide estimates of the mortality reduction attributable to ovarian cancer screening which range from 15% to 28%. Further follow up in UKCTOCS will provide greater confidence about the precise reduction in mortality which is achievable”.

Given the limited progress in treatment outcomes for ovarian cancer over the last 30 years these data, showing for the first time that screening can reduce ovarian cancer deaths, represent a huge step forward.

Further research and health economic analyses are required before population screening can be introduced into general practice. However, the data will encourage new efforts to refine ovarian cancer screening techniques, which will benefit women who do undergo screening.