The risk of pregnancy complications and pregnancy death among girls is greater than that of older women, and skilled nursing can save the lives of women and newborns before and after delivery. 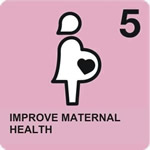 Worldwide, the majority of maternal and newborn deaths occur around the time of birth, typically within the first 24 hours after childbirth. Most of these deaths are preventable.

Of the more than 130 million births occurring each year, an estimated 303 000 result in the mother’s death, 2.6 million in stillbirth, and another 2.7 million in a newborn death within the first 28 days of birth. The majority of these deaths occur in low-resource settings, often lacking skilled birth attendants.

“Far too many women and children are still dying in childbirth from preventable causes often linked to poor quality of care,” says Dr Marie-Paule Kieny, WHO Assistant Director-General, Health Systems and Innovation. “The WHO Safe Childbirth Checklist will help health care workers follow the essential care standards for every birth.”

The checklist, developed and tested in partnership with Ariadne Labs, a joint centre of Brigham and Women’s Hospital and the Harvard T.H. Chan School of Public Health and supported by the Bill & Melinda Gates Foundation, synthesizes existing evidence-based WHO guidelines and recommendations into a single and practical bedside tool targeted at improving adherence to best practices, including adequate communication around the time of delivery.

“We know from other health disciplines such as surgery that a properly implemented checklist of best practices encourages a culture of teamwork, problem solving and discipline that leads to better care,” says Ariadne Labs Executive Director Dr Atul Gawande, a surgeon and Harvard School of Public Health professor. “We believe this simple and low-cost tool can make a difference for women and infants in settings around the world.”

The checklist identifies four pause points each corresponding to a specific period in a health worker’s normal flow of work: when the mother is admitted, just before pushing (or before Caesarean section), within one hour after birth and before the mother and newborn are discharged. These pause points allow birth attendants to make their “checks” at times when they can not only protect the mother and newborn against dangerous complications, but also at the most convenient times in their work flow.

For example, during the “soon after birth” phase, the birth attendant should check to make sure the mother is not bleeding abnormally or does not have an infection and that she has started breastfeeding and skin-to-skin contact. During the “before discharge” phase, the birth attendant should confirm that the mother and newborn have stayed at the facility at least 24 hours after delivery, the mother’s blood pressure is normal and the baby is feeding well.

Like the WHO Safe Surgery Checklist, the WHO Safe Childbirth Checklist initiative has been established in consultation with health practitioners, patient safety experts, maternal and newborn health experts and patients around the world.

As a further step in the development of the checklist, WHO launched the Safe Childbirth Checklist Collaboration to explore the viability and practical use of the tool in diverse settings around the world. From 2012-2015, 34 groups from 29 countries registered and participated in the collaboration. The lessons and experiences from the projects were used in the development of the implementation guide.

A randomized controlled trial called BetterBirth is currently being conducted in more than 100 hospitals in Uttar Pradesh, India, by Ariadne Labs, Harvard T.H. Chan School of Public Health and the Bill & Melinda Gates Foundation. The objectives of the trial are to measure the impact of the checklist-based intervention on maternal, fetal, and newborn survival; and severe maternal harm. The trial will be completed in 2017.

Achieving skilled attendance at every birth has emerged as a global priority and women in high-risk regions are increasingly being encouraged and incentivized to deliver in health facilities. In practice, however, poor quality care at health facilities is frequently observed.

This fall, all countries agreed to a new set of Sustainable Development Goals from 2016-2030, which include a goal to substantially reduce global maternal and newborn deaths. To advance this agenda, WHO and partners also launched a new Global Strategy for Women’s, Children’s and Adolescents’ Health 2016-2030, a roadmap for countries on what evidence-based investments and actions are required to end the preventable deaths of women, children and adolescents’ and to improve their overall health and well-being.

“In agreeing to the Sustainable Development Goals and the new Global Strategy, world leaders have shown that the health of women, children and adolescents’ are top priorities,” said Dr Flavia Bustreo, WHO Assistant Director-General for Family, Women’s and Children’s Health. “Now it is time to translate this strategy into action. The Safe Childbirth Checklist is a practical tool that could contribute to improving the quality of care of mothers and newborns.”