In a new study, Dr. Ryohei Yasuda and his team from the United States at the Max Planck Florida Institute of Neuroscience (Max Planck Florida Institute of Neuroscience, MPFI) developed a method is called SLENDR, which the method allows for biopsy samples for accurate neuronal DNA modification. With this new technique, the researchers were able to reliably use different colors in the same cell at the same time on two different protein markers. They use a variety of imaging methods and DNA sequencing confirmed that the method SLENDR truly and accurately typing genes. Research results on May 12, 2016 published online in the journal Cell, the paper entitled “High-Throughput, High-Resolution Mapping of Protein Localization in Mammalian Brain by In Vivo Genome Editing”. SLENDR full name CRISPR / Cas9 mediated homologous recombination repair endogenous marker protein unicellular (single-cell labeling of endogenous proteins by CRISPRCas9-mediated homology-directed repair). 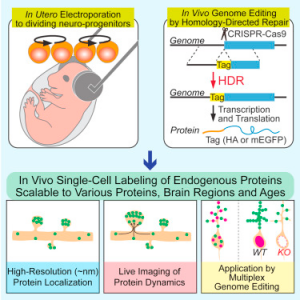 In this study, the researchers tried to understand when we learn and form memories, our brain cells change mode. But the reason for research in this area is the lack of restrictions to allow scientists to locate and visual observation of individual neurons within a single protein technology. Current imaging methods do not provide a strong enough specificity, contrast and resolution to observe the different proteins. In addition, these imaging methods time-consuming and costly; it takes one to two years to develop genetically modified models. But after learned that DNA gene editing technology CRISPR / Cas9 researcher Dr. Jun Nishiyama in doctoral and postdoctoral researcher Takayasu Mikuni, they have a new idea.

CRISPR is a bacterial DNA present in the tool, these single-celled organisms use it to resist infection. When it tried to viruses and infectious DNA into the DNA of a bacterial cell, the bacterial DNA fragment is called CRISPR special cutting viral DNA, so that the latter can not cause serious damage.

Scientists have begun to use CRISPR / Cas9 cutting cell and bacterial organisms in addition to specific genes. When this cleavage, the cells are two ways to repair its DNA. One method is homologous recombination repair (homology-directed repair, HDR), another non-homologous end-joining (non-homologous end joining, NHEJ). HDR is more accurate, rebuild or replace damaged genes, and NHEJ degradation damaged gene, and reconnect to stay together to the end, which often prevent the expression of damaged genes, but does not replace it.

If you use HDR cells to repair themselves, the scientists were able to CRISPR system, adding a desired gene, it will be inserted into the DNA of cells to replace damaged genes. However, many scientists believe that once the cells stop dividing, it is usually not the HDR NHEJ to repair any broken DNA.

Although CRISPR system’s powerful editing capabilities gene impressive, but it is rarely achieved in the manipulation of DNA in brain cells is successful, it is because at the time of formation of the brain, its cells no longer divide. Although scientists can use CRISPR relatively easily knock out certain genes in the brain, but the lack of cell division makes it difficult for them by HDR reliably and accurately typing the desired gene.

To this end, Yasuda and his team developed a method they call SLENDR, this method can be used to accurately modify biopsy samples neuronal DNA. In the experimental model, the researchers chose utero electroporation technology, which allows them to CRISPR / Cas9 into the system is still in development and division of fetal brain cells. Thus, the DNA breakage still be repaired by the HDR, which allows researchers to the protein of interest introduced into the gene capable of visualizing under a microscope. They can reliably even with different colors in the same cell at the same time on two different labeled proteins. They use a variety of imaging methods and DNA sequencing confirmed that the method SLENDR truly and accurately typing genes.

When testing this new technique, the researchers observed that the protein kinase C (protein kinase C, PKC) describe a behavior never before α subtypes. In early development, about 7 days after birth, PKC α subtypes are found in the membrane of neurons in clusters, suggesting that it is a highly active, but in a month after birth, it is widely spread throughout the neurons , suggesting a late development, it is no longer highly active.

Yasuda said, “I think it will be the standard tool SLENDR .SLENDR one kind of molecular and cellular neurobiology research provides a valuable method to determine the subcellular location of the protein, which will help researchers determine the function of these proteins. “