Obesity is a common set of ancient metabolic syndrome group. Eating more calories when the body burns calories, the excess calories stored as fat in the body, it exceeds the normal physiological requirements, and up to a certain value then evolved into obesity. 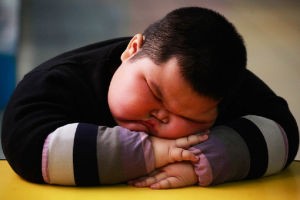 Eating too much is typically considered one of the prime culprits of obesity. A new study published in the Journal of the Association for Consumer Research, looked specifically at overconsumption of “healthy” foods which consumers often perceive as less filling. The researchers successfully found evidence to support their hypothesis that when people eat what they consider to be healthy food, they eat more than the recommended serving size because they associate “healthy” with less filling.

The research utilizes a multi-method approach to investigate the “healthy = less filling” intuition. The first study was conducted with 50 undergraduate students at a large public university and employed the well-established Implicit Association Test to provide evidence for an inverse relationship between the concepts of healthy and filling. The second study was a field study conducted with 40 graduate students at a large public university and measured participants’ hunger levels after consuming a cookie that is either portrayed as healthy or unhealthy to test the effect of health portrayals on experienced hunger levels. The third study was conducted with 72 undergraduate students in a realistic scenario to measure the impact of health portrayals on the amount of food ordered before watching a short film and the actual amount of food consumed during the film. The set of three studies converges on the idea that consumers hold an implicit belief that healthy foods are less filling than unhealthy foods.
Specifically, the researchers demonstrate that portraying a food as healthy as opposed to unhealthy using a front-of-package nutritional scale impacts consumer judgment and behavior. When a food is portrayed as healthy, as opposed to unhealthy, consumers report lower hunger levels after consumption, order greater portion sizes of the food, and consume greater amounts of the food. Surprisingly, even consumers who say they disagree with the idea that healthy foods are less filling than unhealthy foods are subject to the same biases. In addition, the researchers introduce a novel tactic for reversing consumers’ habit of overeating foods portrayed as healthy: highlighting the nourishing aspects of healthy food mitigates the belief that it is less filling.

These findings add to the burgeoning body of work on the psychological causes of weight-gain and obesity and point to a way of overturning the pernicious effects of the “healthy = less filling” assumption. Specifically, the findings suggest that the recent proliferation of healthy food labels may be ironically contributing to the obesity epidemic rather than reducing it. Consumers can use this knowledge to avoid overeating foods presented as healthy and to seek foods portrayed as nourishing when they want to feel full without overeating.

If you want have a good body ,you must be read about obesity treatment.