This year’s flu strain was particularly brutal, disproportionately affecting children and the elderly. A record-breaking rate of 217 of every 100,000 people over the age of 65 have been hospitalized for the flu, while 80 children so far have died from the disease, reports AP. And while flu season is officially in retreat as of Feb. 14, researchers are hoping to take lessons from this year that can be applied to the 2015-2016 season.

A small survey presented on Feb. 23 at the annual meeting of the American Academy of Allergy, Asthma & Immunology in Houston illustrated one area of concern: racial disparities in flu vaccine rates. The survey, conducted in the suburbs around Detroit, found that black people are less likely to get vaccinated for the flu than either white or Asian people.

The survey data shed light on an opportunity to improve the communication around vaccines — especially when it comes to dispelling myths about the injections in some communities, according to lead researcher Dr. Melissa Skupin of Henry Ford Hospital in Detroit. 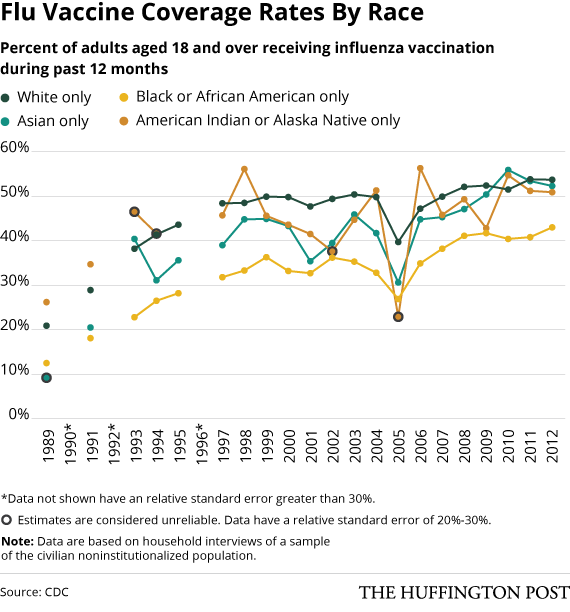 However, Skupin did find that a doctor’s recommendation could significantly influence a person’s decision to get vaccinated; 90 percent of people got the shot if their doctor recommended it, but only 58 percent of people did so if their doctors didn’t recommend it. Unsurprisingly, Skupin’s survey also revealed that people who believed the flu vaccine would help them were more likely to get one (90 percent), as opposed to the people who got a flu vaccine despite not believing in their benefit (58 percent).

Skupin didn’t break down the different reasons people gave for not getting the flu vaccine by race, so she can’t say for sure why the racial disparity in vaccine rates exists in suburban Detroit. But doctor recommendations depend on trust and communication, and previous research has shown it can be notoriously lacking between medical professionals and some communities of color. As a result, people of color sometimes suffer the most when it comes to vaccine-preventable diseases like measles, as the 1989-1991 resurgence in the U.S. showed; Black, Native American and Latino children were three to sixteen times at greater risk for contracting measles than white children during that epidemic, according to a 2014 CDC report.

Skupin’s survey wasn’t nationally representative, but she hopes that her data inspire doctors to be more pro-active about recommending vaccines, as opposed to simply offering them to patients. “A lot of doctors do recommend the flu shot, but for some reason the message is not getting through to patients — that we want them to get it, and that we think it’s beneficial to them,” said Skupin.

“Some of it may have to do with the approach — saying, ‘Would you like the flu shot today?’ as opposed to ‘I recommend you get the flu shot, and here’s why,'” she suggested. “Maybe physicians should be a little bit more proactive and interactive with their patients on vaccines.”

The flu affects an estimated five to 20 percent of all Americans and puts more than 200,000 in the hospital every year, according to estimates from the Centers for Disease Control and Prevention. The flu caused 3,697 deaths in 2013.

Health authorities recommend the flu vaccine to anyone over six months old. However, only about 45 percent of adults get vaccinated for the flu every year, according to CDC numbers from the 2011-2012 flu season. There is a silver lining, however. While there are disparities among different races, vaccine rates for all race groups have inched upward since 1989.

Skupin hopes that trend continues, as more people bring questions about vaccines to their doctors. “We want people to ask questions and bring in any concerns they have about vaccines, rather than just not getting vaccinated.”