thanks to new solar-powered technology, residents of a remote village in Mexico are producing their own purified drinking water. 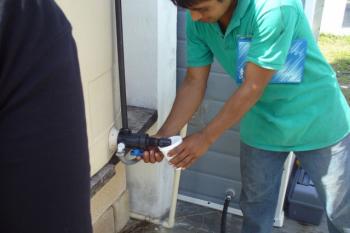 In a case study published in the journal Desalination, the Massachusetts Institute of Technology (MIT)

researchers behind the new technology describe how, together with the villagers of La Mancalona in the Yucatan

peninsula, they developed and implemented a way to make the water purification system self-sustaining in the long

La Mancalona is home to around 450 indigenous residents, mostly subsistence farmers and beekeepers. In their

paper, the authors describe the technical and economic models they used to translate the technology from the lab to

the field and configure it for the community.

Thanks to the development methods and materials used, the villagers are able to operate and maintain the

water purification system themselves, which they have been doing for nearly 2 years now.

two solar panels and produces about 1,000 liters of purified water a day from brackish well water and collected

that with careful design and training, non-expert communities can operate high-tech systems themselves. He says

their paper shows how you can change the culture of a poor community; in this case, they used their engineering

knowledge to produce a high-quality system and then trained the community in how to use it in a sustainable way.

The system is operated as a community business. The villagers pay a price they can afford for the purified water,

and this amount makes the system self-sustainable, say the researchers.

The villagers pay 5 pesos per 20-liter bottle. This price was agreed by the community and is around one-tenth of

the price they have to pay for the alternative source of clean drinking water, which is about an hour’s drive from the village.

the villagers manages the income, sets aside an amount for maintenance and repair and reinvests the rest back into

The villagers are now planning to sell clean water to the tourists who come to visit the local Mayan ruins. First

author Huda Elasaad, from the mechanical engineering department at MIT, says: “It’s been interesting seeing what

they’ve done with this new economy.”

Elasaad, who played a key role in training the villagers, says they have taken ownership of the technology. They

know how to operate and maintain it on a day-to-day basis, from replacing the ultraviolet lights and filters to

The villagers also have a list of local suppliers from whom they can obtain spare parts.

The following video explains how the technology works and how the La Mancalona community is using it:

As well as the economic benefits, the researchers hope the system will bring health benefits to the community –

something they want to study in the future. Elasaad notes:

“Before, they couldn’t afford clean water, but they could afford soda, which was actually cheaper than bottled

water in that village. Now we see a shift; these children are drinking more water and becoming more healthy and

villages but also in crowded cities, as Prof. Dubowsky explains:

“This technology would enable hotels, schools, hospitals, governments, etc, to produce water at a

greatly reduced price. The technology MIT has developed is capable of producing economic value in these

A growing problem in the protection of water resources is the rise in micropollutants, including pharmaceutical

drugs that enter the system via wastewater. Medical News Today recently learned how a team led by Leuphana

more biodegradable. The researchers suggest their approach could lead to a truly sustainable way to protect