Smiley faces help kids to eat more nutritious meals. As odd as it sounds, that is the message of new research presented at the Pediatric Academic Societies annual meeting in San Diego, CA. 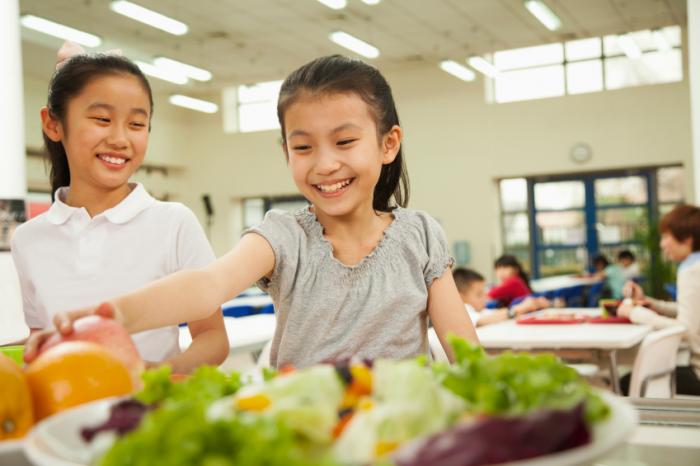 In an effort to combat rising levels of childhood obesity, researchers have turned their attention to attempting to improve the quality of school lunches, but the challenge is making cafeteria options more nutritious while still making the food appealing to children.

In Cincinnati, OH, researchers trialed a two-phase intervention among kindergarten through sixth-grade students at an inner-city school.

In the first phase, smiley faces were used to label healthy foods such as fruits, vegetables, fat-free milk and whole grains. Later, researchers introduced a “Power Plate” of four healthy foods that came with a small prize – such as a sticker, mini beach ball or temporary tattoo.

The study found that:

“It looks like we found a very promising, low-cost and effective way of improving the nutrition of elementary school children. This type of program may be a useful component in schools trying to improve the nutrition and health of their students.”

Other strategies to improve the nutritional value of school meals

Recently Medical News Today looked at a study by researchers from the Harvard TH Chan School of Public Health in Boston, MA, that looked at the effects of a chef-led program of school meals.

The chefs attempted to improve cafeteria meals by including more whole grains, fresh and frozen produce, seasonings without added salt or sugar and healthier polyunsaturated and monounsaturated fats instead of saturated fats.

But getting kids to eat healthier meals is not always so easy. In 2012, a study investigating the Healthy, Hunger-Free Kids Act advocated by Michelle Obama as an effort to reduce calorie intake and improve nutrition in school meals found that the new meal standards had been unpopular with students and parents alike.