A new study shows how a bacterium that is often abundant on human skin secretes an enzyme with antioxidant properties that not only helps the microorganism itself survive, but it may also protect us against damage and disease. 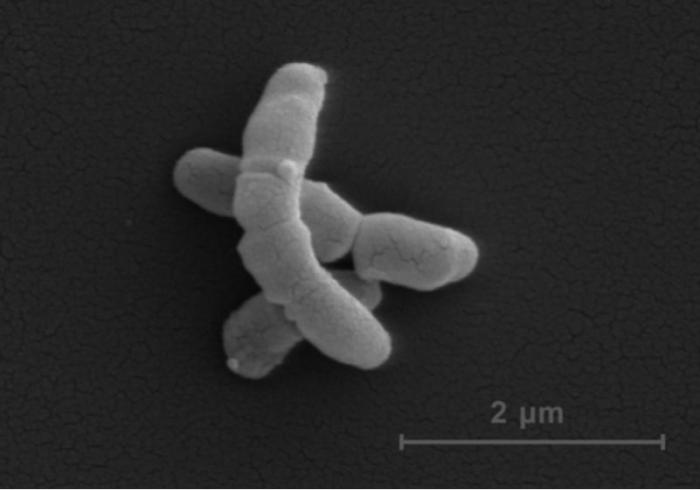 The researchers found that a unique antioxidant enzyme secreted by the skin bacterium P. acnes not only protects the microorganism from oxidative damage, but also appears to help maintain healthy skin.
Image credit: Matthias Mörgelin/Lund University

“The name originates from the fact that the bacterium was first discovered on a patient with severe acne. But whether it causes acne is uncertain – it may have been present merely because it is so common.”

P. acnes is one of many species of microorganisms, or microbiota, living in association with the human body – collectively known as the human microbiome. The bacterial cells in these communities outnumber the human cells of the body by more than 10 to 1.

It is becoming clear that we depend on these bacteria for our health as much as they depend on us for giving them an environment in which to flourish. They produce some vitamins that we do not have the genes to make and they break down food so we can extract the nutrients we need for survival. They even teach our immune system how to recognize dangerous pathogens and help it synthesize anti-inflammatory compounds.

There is increasing evidence that changes in the composition of our microbiomes are linked to several diseases, raising the suggestion that manipulating the microbiome could be a way to treat illness.

In their study paper, the authors note that the role of skin microbiota in human health is poorly understood.

From their various experiments – including tests on human skin cultures – the researchers found that “RoxP is able to both reduce free radicals and protect molecules from oxidation.” They go on to note:

“To the best of our knowledge, this is the first characterized bacterial extracellular enzyme with antioxidant activity.”

A common example of the damage caused by oxidative stress is that which results from exposure to ultraviolet radiation from the sun. Oxidative stress is also thought to contribute to several skin diseases, including psoriasis, atopic dermatitis, and skin cancer.

It appears that the antioxidant properties of RoxP are as strong as those of known antioxidants, such as vitamin C and vitamin E.

P. acnes is the most common bacterium found on human skin. It is present in both healthy skin and diseased skin. However, Dr. Lood explains that as levels of the bacterium vary among individuals, it is likely that levels of RoxP also vary, giving more or less protection.

The authors also note that while it is assumed that the bacteria that live on the skin are generally regarded as being beneficial to the host, few mechanisms have been shown to support this idea.

However, their study shows that a unique antioxidant enzyme from P. acnes not only protects the bacterium from oxidative damage, but also appears to help maintain conditions needed for healthy skin.

“This protein is important for the bacterium’s very survival on our skin. The bacterium improves its living environment by secreting RoxP, but in doing so it also benefits us.”

The team is now planning further investigations in human patients and laboratory animals. The study in human patients will investigate links between the amount of RoxP on patients’ skin and degree of illness in basal cell carcinoma and a precancerous condition called actinic keratosis.

The animal study will investigate whether RoxP also has protective properties. It will compare the effect of ultraviolet radiation exposure on mice treated with RoxP with untreated mice.

Dr. Lood suggests if the results of these further studies are positive, then they could lead to RoxP being included in sunscreens and used in treatments for skin conditions like psoriasis and atopic dermatitis.

Discover how gut bacteria boost the effectiveness of a common chemotherapy drug.

Yogurt Does Not Solve Your Gut Microbial Groups