A clinical trial that tested a simple seven-item list of predictive factors finds it is an effective screening tool for helping doctors identify patients at risk for chronic obstructive pulmonary disease – a progressive lung disease where it becomes hard to breathe. The screening tool works even when patients are not experiencing symptoms. 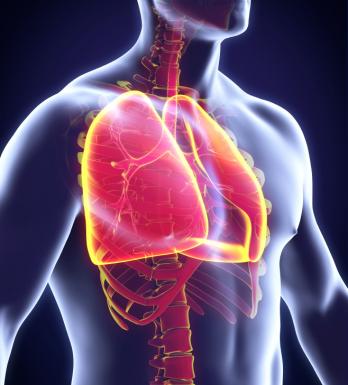 As COPD progresses, it becomes harder for the lungs to take in oxygen and get rid of carbon dioxide.

Chronic obstructive pulmonary disease (COPD) is a progressive disease that makes it hard to breathe. As symptoms progress, patients experience wheezing, shortness of breath, chest tightness, and they cough up large amounts of mucus.

The trial, which took place in primary care settings in four Latin American countries: Argentina, Colombia, Venezuela, and Uruguay, is part of the Prevalence Study and Regular Practice, Diagnosis and Treatment (PUMA) study and is reported in the journal Respirology.

The leading cause of COPD is smoking – most people with COPD are smokers or ex-smokers. However, long-term exposure to other lung irritants – such as chemical fumes, air pollution, dust, and smoke from woodstoves or cookstoves (biomass smoke) – also raise the risk of COPD.

The lungs are where our bodies exchange carbon dioxide, a byproduct of burning glucose for energy in cells, for oxygen, which cells need to burn the glucose.

The skin of these sacs, which contains lots of tiny blood vessels, is where the gas exchange takes place.To make this exchange between the bloodstream and the air, our lungs have airways that branch into smaller and smaller tubes (bronchioles) that terminate in little sacs called alveoli.

COPD is the third leading cause of death in the U.S.

Another reason that breathing becomes more difficult is the walls of the airways become thick and inflamed (bronchitis), or they produce more mucus than usual, which clogs them up.

In people with COPD, the gas exchange becomes progressively less effective, for any number of reasons. One reason is the airways and air sacs become less elastic, or the walls between them are destroyed. This is called emphysema.

COPD is the third leading cause of death in the United States, and a major cause of disability. There are currently millions of Americans living with a COPD diagnosis, and many more have the disease but do not know it.

In most cases, COPD is diagnosed in middle-aged and older adults. There is currently no cure, and we do not yet know how to reverse the damage to the lungs. However, treatments and lifestyle changes can alleviate symptoms, slow disease progress, and help people with COPD become more active.

The main test for COPD is a painless test called spirometry, where you blow hard into a tube connected to a small machine that measures how much air you breathe out. It also measures how fast you can blow air out.

Thus, the longer you take to exhale all the air you can force out, the lower your FEV1/FVC ratio.

In this study, the researchers used two definitions of COPD. One was having an FEV1/FVC ratio of under 0.7 (an absolute value), and the other, called the lower limit of normal (LLN) of FEV1/FVC, is a cut-off level that depends on the population studied (for example, the lowest 20 percent).

The researchers invited patients of age 40 and over, who were current or former smokers, or who were exposed to biomass smoke, to complete a questionnaire and undergo spirometry tests.

The purpose of the trial was to measure how common COPD was in patients visiting primary care settings – for any reason – to assess how useful it might be to screen for them, and whether the screening tool under investigation was accurate for this purpose.

The questionnaires the patients completed, plus data easily obtained from medical records, yielded seven predictive factors: gender, age, pack-years smoking, breathlessness, sputum, cough, and whether they had undergone a spirometry test before.

Pack years smoking is calculated from the number of packs of cigarettes smoked per day multiplied by the number of years the person has smoked. Thus, one pack (20 cigarettes) per day for 1 year is one pack-year of smoking.

The researchers found the seven-item screening tool predicted which patients’ spirometry tests put them in the COPD category at least 76 percent of the time.

They found that heavy smokers over the age of 50 with breathlessness, who had had a spirometry test before, were the patients most likely to have COPD.

“This simple seven-item score is an accurate screening tool to select subjects for spirometry in primary care.”

The following animation from the National Heart, Lung and Blood Institute explains what COPD is, how it affects the lungs, and how its progress can be slowed.