and takes control of their machinery to replicate itself and hide from the immune system. 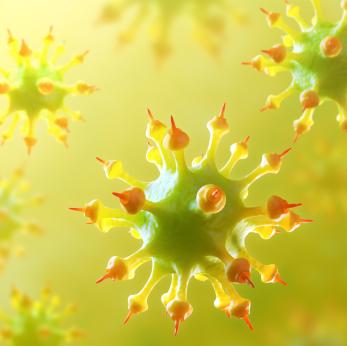 Viruses insert their DNA into host cells and use their machinery to make copies of themselves.

rather than the immune system.

Researchers from the University of Cambridge in the UK, and two German institutions: the Julius-Maximilians-

Universität Würzburg and the Ludwig-Maximilians-Universität München, report their findings in the journal

They describe how HSV-1 inserts its DNA into

our cell DNA, takes over and disrupts the production of cell proteins while using it to make perfect versions of its own proteins.

Herpes simplex virus 1 (HSV-1) is very common and usually harmless. Most people become infected by their

early 20s, and after the first infection, the virus remains dormant in the facial nerve tissues.

Now and again, the virus flares up and causes mild cold sore symptoms. But there are also cases where HSV-1 can lead to life-threatening disease. For instance, in intensive care units, it can cause severe lung

And even in healthy people, there are rare instances where HSV-1 can spontaneously cause inflammation

of the brain, resulting in irreversible brain damage.

From genes to proteins: transcription and translation

Our DNA code contains the instructions for making all the cells of our whole body, and the work that they do.

Each cell contains the DNA for the whole individual, but not every cell needs to obey all the instructions in

all of the DNA.

DNA on its own does not do anything. Imagine a cell is like a factory – its DNA holds the map of the factory and the instruction manuals for its production line. For the factory to work it needs

workers and machinery. The cellular equivalent of these are proteins – the workhorses that carry out all the

To create the workhorses or proteins, cells make working copies of the genes in the DNA that are

bits of code relevant to lung and other types of cell.

RNA molecules – they decide which proteins should be made by the cell.

The next stage, where RNA molecules instruct the cell machinery to make proteins is called translation. So

the process of using DNA to make proteins has two stages – transcription and translation.

Viruses are not like cells – they have DNA, but no machinery. They survive by inserting their DNA into the

DNA of host cells so that instead of making proteins for the cells, the cell machinery makes virus proteins and

copies of the virus. Eventually, the host cell bursts and releases all the new virus particles so they are free

to go and hijack other host cells.

Within a few hours of invading a host cell, HSV-1 has seized the protein-making machinery and is producing

its own proteins and copies of itself on a massive scale.

The new study investigates in detail how HSV-1 manages to do this and evade detection by the immune system,

which normally spots cells behaving abnormally and kills them before they can do too much damage.

The study team used cultures of fibroblasts – a type of human connective tissue cell. They note this is an

The researchers found that within 4 hours of entering the cell, HSV-1 does something quite unexpected.

Usually, the process of transcribing the DNA into RNA stops when it reaches the end of the gene. A section of

code that marks the end of the gene tells the transcription process to stop.

But in a host cell controlled by HSV-1, the transcription process ignores these end codes and goes

on, blindly transcribing from DNA into RNA thousands of irrelevant sections of A, C, G and T code – sometimes

from neighboring genes. The result is masses of unusable RNA products that cannot be translated into

One of the senior investigators, Professor Lars Dölken from Cambridge’s department of medicine and Würzburg’s

institute of virology, describes the effect HSV-1 has on the host’s transcription process:

“It’s like someone transcribing a short story, but instead of stopping at ‘The End,’ they carry on and

transcribe all the copyright and publication details and ISBN numbers at the beginning and end of the book. This

Another interesting discovery is that although the host DNA is transcribed into nonsense, it transcribes the

Thus, HSV-1 produces two results that are to its advantage. The effect of producing nonsense from the host

cell DNA causes the cell to shut itself off – preventing the immune system from attacking the virus. And this in

activates large numbers of genes that normal host transcription would overlook. They suggest something else is

happening: because the transcription does not stop at the end codes, it may appear that hundreds of additional

genes are being transcribed, but these are never translated into proteins. Prof. Dölken explains:

“Unlike previous studies, which only studied single genes, we also found no indication that the virus

generally impedes the processing of RNA in the cell nucleus, known as splicing. Instead, it causes unusual

splicing events, many of which have never before been observed.”

The study also achieves a significant step forward in the method for studying viruses in cells. It shows how

their effect on protein production.

Viruses like HSV-1 can remain dormant in their hosts for a long time and then flare up again. Why this

happens is somewhat of a mystery, but in June 2014, Medical News Today learned about a study published

in the journal Science that showed how interactions between different

In that study, the researchers investigated how human herpes virus 8 reactivates. Working first with a mouse

model, and then repeating the results in humans, the team found that after initial infection, the host protein

interferon gamma kept the virus dormant in the body. But this effect was canceled following an infection from a