In 2014, a team of researchers in the Lewis Katz School of Medicine at Temple University became the first to successfully eliminate the HIV-1 virus from cultured human cells. Fewer than two years later, the team has made further strides in its research by eliminating the virus from the genome of human T-cells using the specialized gene editing system they designed. 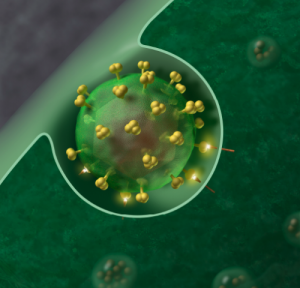 In a new study published in Scientific Reports, the researchers show that the method can both effectively and safely eliminate the virus from the DNA of human cells grown in culture.

How this research differs
In previous work, the team—led by Kamel Khalili, professor and chair of the Department of Neuroscience at Temple—had demonstrated the ability of their technology to snip out HIV-1 DNA from normal human cells. The newest findings used that same technology to snip out the virus from latently and productively infected CD4+ T-cells, which host the virus in persons infected with HIV.

In this round of research, the scientists used blood drawn from actual patients living with HIV. These ex vivo experiments allowed T-cells from patients infected with HIV to be grown in cell culture and treated with the gene editing system. Results showed that the treatment system can eliminate the virus and protect cells against reinfection.

Another major component of the study addressed questions about potential side effects and toxicity. The researchers used the gold standard in genomic assessment known as ultra-deep whole-genome sequencing to analyze the genomes of HIV-1-eradicated cells for mutations in genes outside the region targeted by the process. Their analyses ruled out off-target effects on genes and showed that HIV-1-eradicated cells were growing and functioning normally.

What the research means
“The findings are important on multiple levels,” said Khalili, also director of the Center for Neurovirology and director of the Comprehensive NeuroAIDS Center at Temple. “They demonstrate the effectiveness of our gene editing system in eliminating HIV from the DNA of CD4+ T-cells and, by introducing mutations into the viral genome, permanently inactivate viral replication. Further, they show that the system can protect cells from reinfection and that the technology is safe for the cells, with no toxic effects.”

“These experiments had not been performed previously to this extent,” he added. “But the questions they address are critical, and the results allow us to move ahead with this technology.”