responding to parasitic worm infections or during allergy reactions like asthma 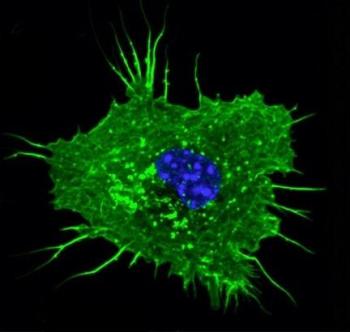 The dendritic cell is part of the body’s first response to combating a worm infection or allergic response.
Image credit: The University of Manchester

their work in the journal Nature Communication.

of the Manchester Collaborative Centre for Inflammation Research – says:

the world it is vital that we develop better methods of treatment.”

devastating global impact of worm infections and allergies, there are no effective

vaccines or refined treatments, and our understanding of the cell types and mediators

that control our inflammation and immune response to them is limited.

For their study, the researchers focused on dendritic cells – one of the first

responders to worms or allergens. Dendritic cells recognize the type of infection and

However, while we know this much, the underlying biology of the recognition and

response to worms and allergens is still somewhat of a mystery. For example, how do the

To explore the question of how dendritic cells activate the helper T cells, the

parasitic worms and lung allergens such as house dust mites.

dendritic cells they behaved very differently and could not activate the helper T cells.

In their paper, they highlight how in recent years it has become clear that epigenetic

Prof. MacDonald summarizes the results and implications of the study:

controller of dendritic cells during inflammation against parasitic worms or allergens.

It’s an important step, as all inflammation is not identical, and scientists try to

He explains that in the past, drugs have tended to take a broad approach, tackling all

aspects of a disease rather than targeting any specific one. Studies like theirs, mean

caused specifically by an allergy or a parasitic worm, rather than by a virus such as a

Prof. MacDonald also notes that it is important to tackle the inflammation that these conditions

cause, because we know that they can develop into longer-term diseases such as

In February 2015, Medical News Today reported how researchers from Imperial

and allergies. Their study also focused on epigenetic influences as opposed to DNA