disease, it is not clear how. Now a new study finds that in the early stages of the

disease, some immune cells that normally protect the brain undergo changes and begin to 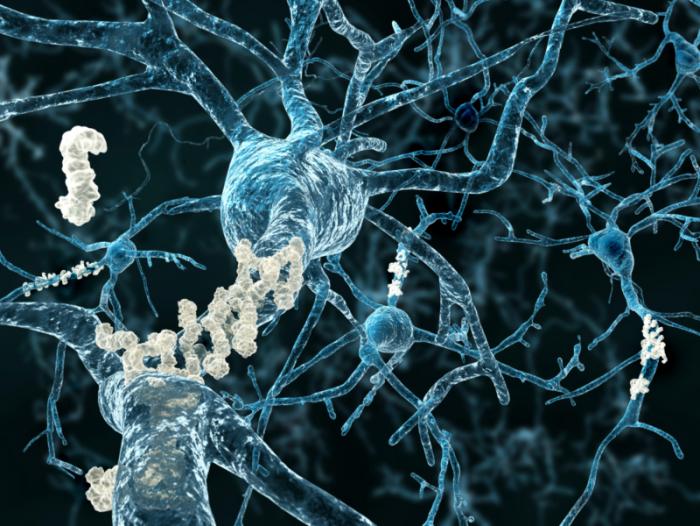 One of the hallmarks of Alzheimer’s disease is abnormal plaques of protein fragments that build up between brain cells.

The study team – from Duke University in Durham, NC – report their findings in The

system so they could investigate immune changes in the early stages of the disease.

small-molecule drug. When they tested it on the mice, it prevented the brain plaques and

memory loss that are characteristic of Alzheimer’s disease.

“If indeed arginine consumption is so important to the disease process, maybe

we could block it and reverse the disease.”

that involves thought, memory and language. Symptoms start with mild memory loss and can

According to the Centers for Disease Control and Prevention (CDC), in 2013, as many as 5

these are the classic hallmarks of the disease. Plaques are clumps of sticky beta-amyloid

protein and tangles are twisted strands of tau protein.

The mouse model that Prof. Colton and colleagues used in the new study is slightly

different to ones normally used for Alzheimer’s research. The team had developed it years

before by swapping some genes to make its immune system more like that of humans.

The mouse – called CVN-AD – shows all the signs of Alzheimer’s disease: plaques,

lifespan. One detail they observed is that while the number of components in the immune

system stayed more or less the same, within that, a type of immune cell known as

of infection, they arrive on the scene. By analyzing a molecule called CD11c that these

cells brandish on their surfaces, the team found high expression of genes associated with

immune suppression, and also low expression of genes that boost the immune system.

The team was surprised by these unexpected findings. Alzheimer’s researchers have been

for memory, that the changed microglia and arginase, an

enzyme that breaks down arginine, were highly expressed.

before the symptoms started in the mice. They found fewer altered microglia and plaques

The small-molecule drug they used is called difluoromethylornithine (DFMO). It is

tested as a possible treatment for Alzheimer’s disease.

In this study, the team investigated the effect of DFMO on the early stages of the

Alzheimer’s, before symptoms appeared in the mice. They now plan to test its effects on

the disease after symptoms appear.

Prof. Colton does not recommend people start consuming more arginine on the strength

of these findings. Just eating more of the amino acid does not guarantee it reaches the

parts of the brain that need it – and besides, the blood-brain barrier decides how much

enters the brain from the bloodstream. Plus, if these findings are correct, it is the

enzyme arginase that is the problem, and will continue to break down the arginine.

Prof. Colton says that the findings will point research into Alzheimer’s disease in new directions – it will make us thing about Alzheimer’s in a “completely different

way,” and break the “stalemate of ideas,” as she explains:

“The field has been driven by amyloid for the past 15, 20 years and we

or how to develop effective therapeutics.”

The study was funded by the National Institutes of Health, the Alzheimer’s

Meanwhile, Medical News Today recently learned of a study that links a diet

high in methionine to increased risk of memory loss. Methionine

is an amino acid found in meat, fish, eggs and dairy products.