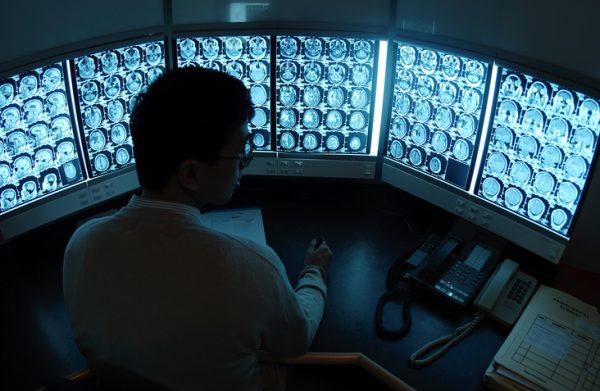 At the annual J.P. Morgan Healthcare conference that concluded last week, the majority of panelists on a panel discussing digital health dismissed artificial intelligence in healthcare as overhyped.

Deborah DiSanzo, general manager of IBM Watson Health, who presented her company’s vision at the conference in San Francisco and Vinod Khosla, founder of investment firm Khosla Ventures, who spoke at a satellite conference beg to differ. And by a lot.

IBM Watson Health, with its acquisition of Merge Healthcare, has amassed a vast volume of imaging data – 30 billion to be exact — and is putting its machine learning power to work.

In a question-and-answer session following her presentation, DiSanzo explained that Watson can actually prioritize the image stack in a CT scan for example, and tell radiologists which images to see first and not waste time in viewing images that have nothing in them. What’s more, the technology can also pull in unstructured text data from an electronic health record to provide context and decision-making support to the radiologists, DiSanzo explained.

All that sounds good, but is there pushback among physicians and radiologists who don’t necessary welcome technology intervention, came a question from the audience. DiSanzo shared an anecdote about the change of heart that radiologists at the annual RSNA meeting in Chicago have experienced. Here is a slightly edited version of her answer:

This is my favorite story. I have been attending RSNA, the largest conference for radiologists, since 1990. And when I went in 2015, the visionaries of RSNA, the leaders of RSNA said, “Deborah, you should know better. We can understand that IBM, the technology company saying that they can read images better, but you’ve been in this world a long time. You should know better.”

And I said, “No, just come look.” And when they came over, they looked and said, “We’ve been waiting for a breakthrough for 30 years. This is a breakthrough.”

Now this year at RSNA, RSNA had Eyes of Watson, where we had set up Watson in the RSNA Learning Center on machine learning and 3,000 attendees came and looked at Watson and interacted with Watson. Three thousand attendees.

I think radiologists are very tech savvy. Radiologists have turned the corner [and are saying] “Hey I don’t need to look at images that don’t have anything on them and this could dramatically help my workflow.”

In other words, radiologists will embrace technology that will make their lives easier.

A day earlier, Khosla also talked about the power of machines but in more stark terms, at the Startup Health Festival in San Francisco.

Khosla Ventures has invested in Israeli medical startup Zebra Medical Vision that is aiming to teach computers to read medical images and diagnose them as well. The company believes that the supply of radiologists is outpacing the demand for them and hence technology is needed to fill the gap.

IBM’s DiSanzo is probably striving toward a similar goal but was very careful never to use the word “replacement” in the way she describes IBM’s machine learning capabilities. Instead, she views it as augmented intelligence.

“We do this in partnership between Watson and a doctor,” in an interview following her presentation and Q&A session at J.P. Morgan last week.

So is future of radiology as we know it in doubt? You bet.