Radon is a colorless, odorless and poisonous radioactive noble gas, which is a decay product of radium by, people suffered a major source of internal exposure. 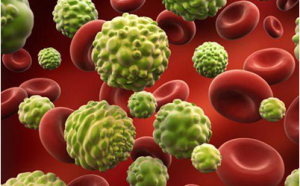 A new report finds a statistically-significant, positive association between high levels of residential radon and the risk of hematologic cancer (lymphoma, myeloma, and leukemia) in women. The study is the first prospective, population-based study of residential radon exposure and hematologic cancer risk, leading the authors to caution that it requires replication to better understand the association and whether it truly differs by sex. It appears early online in Environmental Research.

Radon is a naturally occurring byproduct of the decay of radium, and is a known human lung carcinogen, the second-leading cause of lung cancer in the United States. Modeling studies show that radon delivers a non-negligible dose of alpha radiation to the bone marrow and therefore could be related to risk of hematologic cancers. Studies to date, however, have produced inconsistent results.

More than 171,000 new cases of hematologic cancer and more than 58,000 deaths are expected in the United States in 2016. Hematologic cancers are the most expensive cancers to treat per quality-adjusted life year gained.

For the current study, researchers led by Lauren Teras, Ph.D. of the American Cancer Society used data from the American Cancer Society Cancer Prevention Study-II Nutrition Cohort established in 1992, to examine the association between county-level residential radon exposure and risk of hematologic cancer. The analysis included 140,652 participants among whom there were 3,019 hematologic cancers during 19 years of follow-up.

The authors say men may have a higher baseline risk, possibly because of more exposure to occupational or other risk factors for hematologic cancer, reducing the impact of any additional risk from residential radon. In women, who have a smaller baseline risk, residential radon exposure might be a larger contributor to overall risk. Another reason may be that the women of this generation spent more time in their homes, so had more residential exposure than men.

“The overall lifetime risk of hematological cancers in the United States is about 2%, so even a 60% relative increase would still mean a relatively small absolute risk,” said Dr. Teras. “Nonetheless, radon is already associated with lung cancer, and if other studies confirm the link to blood cancers, we think it would warrant strengthened public health efforts to mitigate residential radon risks.”