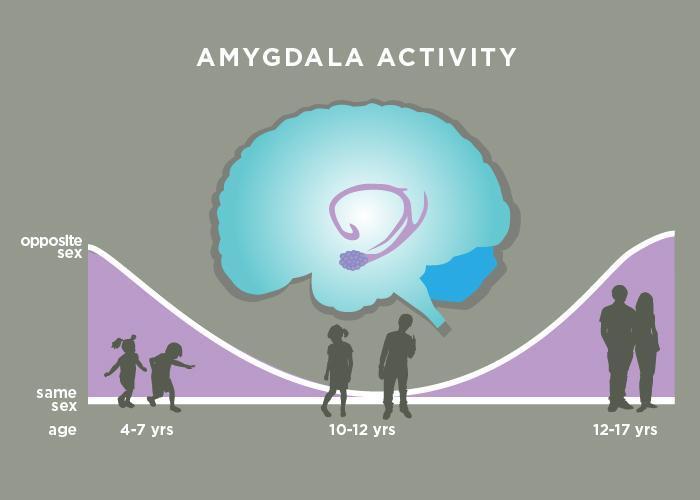 Published in the Journal of Cognitive Neuroscience, the study challenges previous beliefs about the role of the amygdala, according to the researchers.

Lead investigator Eva Telzer, of the University of Illinois at Urbana-Champaign, says the amygdala was once believed to be a threat detector. “But increasing evidence indicates that it is activated whenever someone detects something meaningful in the environment,” she notes. “It is a significance detector.”

To reach their findings, Telzer and her team enrolled 93 youths aged 7-17 years to the study and assessed their attitudes toward children of the same sex and of the opposite sex.

In addition, the researchers used functional magnetic resonance imaging (fMRI) to assess the brain activity of 52 youths aged 4-18 as they viewed same- and opposite-sex faces.

Amygdala activity wanes between the ages of 10 and 12

“Only the youngest children in our sample demonstrated a behavioral sex bias such that they rated same-sex peers as having more positive (and less negative) attributes than opposite-sex peers,” say the researchers.

Interestingly, children of this age showed increased brain activity in the amygdala region of the brain as they viewed faces of the opposite sex. “And so we think the amygdala is signaling the significance of cooties at this developmental period,” says Telzer.

The researchers found that among children between ages of 10 and 12, there was no difference in the amygdala’s response to same- and opposite-sex faces.

However, they saw a significant increase in amygdala response to the opposite sex from 12 years onwards – just as children begin to enter puberty. The researchers say this may correspond with the “crush” phenomenon, in which pubescent youths become captivated with the opposite sex.

“When puberty hits, gender becomes more significant again, whether it’s because your body is changing, or because of sexual attraction or you are becoming aware of more rigid sexual boundaries as you become more sexually mature,” says Telzer. “The brain is responding very appropriately, in terms of what’s changing developmentally.”

In May 2014, Medical News Today reported on a study published in the Proceedings of the National Academy of Sciences, in which researchers found changes in cerebral blood flow levels differ between girls and boys during puberty, with such levels rising in girls and reducing in boys.

The researchers of that study – led by Dr. Theodore Satterthwaite of Perelman School of Medicine at the University of Pennsylvania – say the findings were linked to higher risk of anxiety in females and increased risk of schizophrenia in males.

“These findings help us understand normal neurodevelopment and could be a step toward creating normal ‘growth charts’ for brain development in kids,” says Dr. Satterthwaite. “These results also show what every parent knows: boys and girls grow differently. This applies to the brain as well.”