Prostate is the male gonad-specific organ. Prostate such as chestnuts, bottom side up, and bladder with stickers, tip down, arrived in urogenital diaphragm, posted in front of the pubic symphysis, behind according to the rectum, so there is prostate enlargement, do the digital rectal examination, prostate palpable on the back. In the middle of the urethra passes through the prostate gland, guardian of urethra catchy, so sick of prostate, urination first affected.

The prostate is very rare in the human body, with internal and external secretory function of sexual glands double. 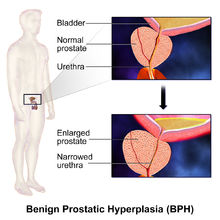 Also known as benign prostatic hyperplasia (BPH), an enlarged prostate is a common condition unrelated to cancer that affects about 210 million men worldwide, according to researchers from UVA’s Division of Interventional Radiology and Department of Urology. By age 80, 9 of 10 men have an enlarged prostate, with half of these men experiencing symptoms. Symptoms can include frequent urination, painful urination, an urgent need to urinate, excessive nighttime urination, weak urine stream and incomplete emptying of the bladder.

How the Study Treatment Works
UVA is among a few sites in the U.S. examining the safety and effectiveness of a procedure called prostatic artery embolization (PAE). Pioneered by interventional radiologists in Europe and Latin America, PAE may provide a potential alternative to other available invasive surgical treatments.

During a PAE procedure, doctors make a tiny nick in the groin and guide a small tube called a microcatheter into the small arteries that supply the prostate with blood. Microparticles are injected into the arteries to block blood flow to the prostate, with the goal of shrinking the prostate and improving unpleasant urinary symptoms.

“We’re excited to study this nonsurgical option for prostate symptoms, hopefully sparing men the risks of incontinence and sexual dysfunction, in the setting of this U.S. Food and Drug Administration-monitored clinical study,” said Ziv J. Haskal, MD, FSIR, the trial’s Principal Investigator and Professor of Radiology at the UVA School of Medicine.

Data from the largest clinical trial to date reported sustained improvement in symptoms for 72 percent of men three years after receiving the investigational treatment.

You must be take care.