A also called Streptococcus pyogenes, is one of the most important human pathogenic bacterial infection. The infection caused by the main acute pharyngitis, acute tonsillitis, can cause lung infection, fever, skin and soft tissue infection, and can cause systemic infection, the bacterium is the indirect cause of allergic diseases of rheumatic fever and acute glomerulonephritis in recent years, severe infection of group A Streptococcus caused by the invasion of group A streptococci growth rate, also attracted more attention concerning the bacterial infection. 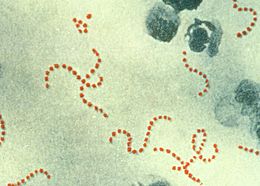 Researchers have discovered how immune cells triggered by recurrent Strep A infections enter the brain, causing inflammation that may lead to autoimmune neuropsychiatric disorders in children. The study, performed in mice, found that immune cells reach the brain by traveling along odor-sensing neurons that emerge from the nasal cavity, not by breaching the blood-brain barrier directly. The findings could lead to improved methods for diagnosing, monitoring, and treating these disorders.

The study, led by researchers at Columbia University Medical Center (CUMC) and the University of Minnesota, Minneapolis, was published today in the online edition of the Journal of Clinical Investigation.

Recurrent Group A streptococcus (S. pyogenes) infections disease, which cause “strep throat,” have been linked to autoimmune neuropsychiatric disorders, notably Pediatric Autoimmune Neuropsychiatric Disorders associated with Streptococcal infections, or PANDAS. Children with PANDAS exhibit Tourette’s syndrome-like motor and vocal tics or obsessive-compulsive behaviors that appear to happen “out of the blue.”

The Strep A bacterial cell wall contains molecules similar to those found in human heart, kidney, or brain tissue, according to a co-leader of the study, Dritan Agalliu, PhD, Assistant Professor of Pathology and Cell Biology (in Neurology and Pharmacology) at CUMC. These “mimetic” molecules are recognized by the immune system, which responds by producing protective antibodies. But because of this molecular mimicry, the antibodies react not only to the bacteria but also to the host tissues, producing autoantibodies that attack the body’s own tissues. Previously, scientists did not understand how these autoantibodies would gain access to the brain, because brain vessels form an extremely tight blood-brain barrier that prevents free movement of molecules, antibodies and immune cells from the blood into the brain.
A few years ago, researchers discovered that recurrent Strep A infections trigger the production of immune cells known as Th17 cells, a type of helper T cell, in the nasal cavity. But it was unclear how these Th17 cells lead to brain inflammation and symptoms such as those seen in children with PANDAS.

Studying the tissues of mice infected intranasally with Strep A, Drs. Agalliu and colleagues found that bacterial-specific Th17 cells move along the surface of olfactory, or odor-sensing, axons that extend from the nasal cavity through the cribriform plate, a sieve-like bone that separates the nasal cavity from the brain. From there, the cells reach the olfactory bulb in the brain, which processes information about odors.

“Once the Th17 cells enter the brain, they break down the blood-brain barrier, allowing autoantibodies and other Th17 cells to enter the brain and promote neuroinflammation,” said Dr. Agalliu. “What’s interesting is that we see abundant Group A Strep bacteria in the nose, but they never penetrate the brain,” he added. “This is different from Group B Strep—the cause of bacterial meningitis—which causes neuroinflammation by entering the brain directly.”

The findings may lead to a more definitive diagnostic test for PANDAS, which is currently diagnosed based on clinical symptoms and the presence of Strep A infection or autoantibodies against brain proteins. “We are also interested in exploring ways to treat the disorder by repairing the blood-brain barrier itself to prevent the entry of autoantibodies into the brain,” said Dr. Agalliu

Some parts of Africa will get high risk for malaria transmission