Breast cancer is a malignant tumor that occurs in the glandular epithelium of the mammary gland, which is composed of skin, fibrous tissue, mammary gland and fat. 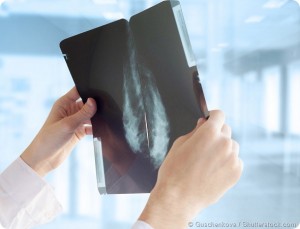 Women who receive a false-positive mammogram result may be at greater risk of developing breast cancer for up to ten years afterwards, report researchers from the US.

Lead author of the study, Louise Henderson (North Carolina School of Medicine), says the results suggests that suspicious findings observed during a mammogram may be a marker of future cancer risk.
In the US, around 67% of women aged 40 or older have their breasts screened every one to two years. Over the course of 10 mammograms, the chance of at least one false-positive result is 42% among women who are screened every two years and 61% among those screened every year. After a mammogram has shown evidence of suspicious tissue, a woman is typically referred for further imaging and sometimes a biopsy is required.

For the study, Henderson and team analyzed data from the Breast Cancer Surveillance Consortium between 1994 and 2009, which comprised 2.2. million screening mammograms undergone by 1.3 million women aged between 40 and 74 years. The women were tracked for 10 years after their initial mammogram, meaning researchers could assess the women’s cancer risk over time.

As reported in Cancer Epidemiology, Biomarkers & Prevention, Henderson and team found that women who had a false-positive and were referred for further imaging were at a 39% greater risk of developing breast cancer at some point during the next ten years compared with women who had a true-negative result.

Those who had a false-positive and were also referred for breast biopsy were at a 76% greater risk. The analysis took into account the common factors that influence breast cancer risk.

Henderson says she does not want women to start feeling worried after reading these results. The researchers intend for their findings to provide a useful tool in the context of other risk factors and looking at the overall risk of breast cancer.

“Our next steps are to consider how to incorporate a prior false-positive mammogram and biopsy results into risk-prediction models for breast cancer,” says Henderson.

Funding for the study was provided by the Breast Cancer Surveillance Consortium and the National Cancer Institute.