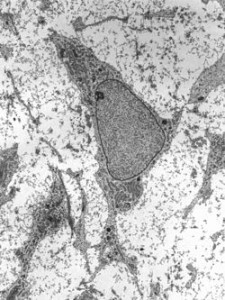 Stem cell scientists have made a key find that aids the quest to produce therapies for patients with liver damage.

They have developed a new technique for growing liver cells from stem cells that is cost-effective and could be adapted for mass production of clinical grade cells.

The process involves growing cells on defined materials – without the need for animal products – which scientists say makes therapies safer for use in people.

Liver cells have already been used as therapies for patients with liver damage with some success. At the moment, donor organs are the only source of cells.

Growing liver cells from stem cells could offer a limitless supply for patient therapies, but the conditions currently used to grow these cells are not amenable to mass production.

Existing methods also rely on the use of animal products derived from tumours, which means that the cells produced in this way cannot be given to patients.

Scientists from the Medical Research Council Centre for Regenerative Medicine at the University of Edinburgh have developed a new technique for growing the cells that uses synthetic material instead of animal products.

Laminins are part of the supportive scaffold that surrounds cells and shapes the complex structure of a tissue.

The team found that growing stem cells on laminins turned them into organised liver cells more efficiently than previous methods.

The resulting cells were more similar to liver cells that have been freshly isolated from a donor organ. They showed similar patterns of gene expression and also arranged themselves to form complex structures that are found in liver tissue.

Researchers say this marks a significant step towards the large scale production of high quality liver cells for use as patient therapies.

The study is published in the journal Stem Cell Reports. It was funded by the UK Regenerative Medicine Platform, the European Union Seventh Framework Programme (FP7) and the German Federal Ministry of Education and Research (BMBF).

Dr Dave Hay, of the University’s MRC Centre for Regenerative Medicine, said: “The development of a defined process to deliver better quality liver cells from clinical grade stem cells is a significant advance. The next step will be to assess their suitability for human use in the appropriate pre-clinical models.”

Dr Rob Buckle, Director of Science Programmes at the MRC, said: “The ability to create therapeutic stem cells in a cost-effective and safe way is at the heart of the UK Regenerative Medicine Platform. It provides the tools and brings together the expertise needed to develop new therapeutic approaches, encouraging fundamental research to be targeted towards specific disease challenges. This project is an excellent example where that is being done and the value of the Platform which has been established.”