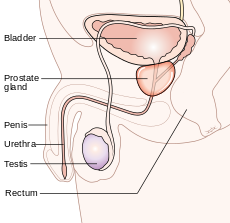 It’s very important for me to have a good body.I heard from my friend get prostate cancer.I think it’s very terrible.what’s prostate cancer? Prostate cancer is a gland in the male reproductive system.The cancer cells may spread from the prostate to other parts of the body, particularly the bones and lymph nodes. It may initially cause no symptoms.In later stages it can lead to difficulty urinating, blood in the urine, or pain in the pelvis, back or when urinating.

Men with prostate cancer run the risk of brittle bones as a side-effect of their treatment.

Football training is not just good for the heart and the muscles. Running around the pitch, jumping, accelerating, braking and kicking the ball also strengthen the bones.

This is remarkable, because men with prostate cancer normally have weaker bones as a consequence of the disease and especially because of the anti-hormone treatment given to patients to lower the level of testosterone in the body.

One side-effect of this treatment is that the bones become decalcified, so the men have an increased risk of osteoporosis, just like women going through the menopause.

“Football training counters many side-effects of the treatment. It is impressive to see such big improvements in both muscular strength and bone density, despite the anti-androgen treatment,” says Peter Krustrup, who is Jacob Uth’s supervisor and Professor of Team Sport and Health in the Department of Nutrition, Exercise and Sports at Copenhagen University.

“Our so-called FC Prostate study showed that just 12 weeks of football training increased leg bone mass and elevated the blood-borne bone formation markers osteocalcin and P1NP by 35 and 50%, respectively. After 32 weeks of training we observed a systematic 1-2% increase in bone mineral density at the hip and upper part of the thigh bone in the football players compared to the control group, equivalent to bones 2-4 years younger, specifies Professor Krustrup.

During the training, the players’ movements were tracked precisely with GPS. The measurements show that the players’ average speed was relatively low, but they performed 300 decelerations, 200 accelerations and 100 running bouts per hour of football training session. This is believed to be the reason why football is better for the bones than jumping on and off a step bench, for example.

“The changes in bone mass in the legs of the football group show a significant correlation with the number of times they accelerate and brake. This gives an indication that the effect is linked to the specific activity that we see in football, where there is interval running with a lot of accelerating and braking which place great stress on the bone tissue, and that is what makes them stronger,” says Uth and continues.

“The more the bones are affected from different angles during exercise, the more complete the stimulation. When you change direction, kick and block the ball, and when you are challenged by an opponent as you are in football, there is a wide range of powerful stimuli to the bone tissue,” he explains.

You must be listen to doctor and take care of your body.