Polycystic ovary syndrome is one of the most common hormonal endocrine disorders that affects around 5-10 percent of women of childbearing age and is characterized by abnormal hormone levels. Now, scientists have found that resveratrol – a natural compound found in red wine and grapes – can help address this hormone imbalance. 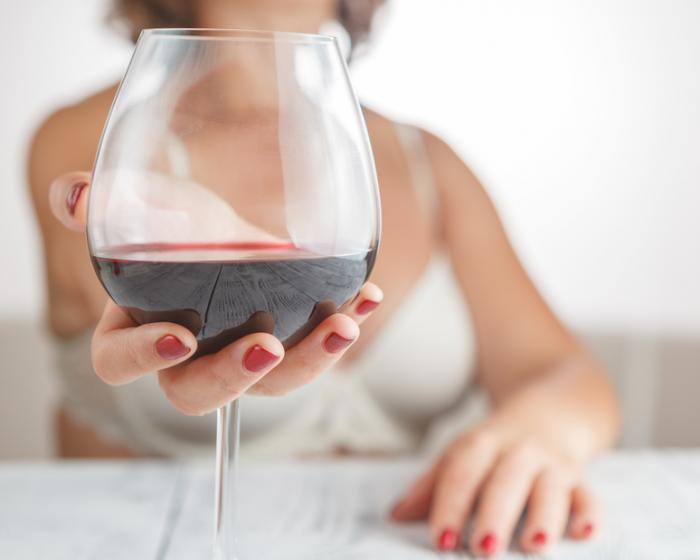 A compound found in red wine may moderate androgen hormones and improve diabetes risk factors in women with PCOS.

Polycystic ovary syndrome (PCOS) is a condition that affects how a woman’s ovaries work. The three most common features of PCOS include irregular periods, excess androgen in the body, and polycystic ovaries that become enlarged and contain many fluid sacs.

While the exact cause of PCOS is unknown, it is related to abnormal hormone levels in the body, including high levels of insulin. Women with PCOS produce marginally higher amounts of testosterone and other “male hormones” than average.

Elevation of these hormones can contribute to infertility, weight gain, acne or excess body hair, in addition to other health issues, such as diabetes. Most current treatment strategies focus on management of individual concerns, such as fertility, hirsutism, or obesity, and the use of birth control pills to decrease androgen production.

According to researchers, the new study – published in the Endocrine Society’s Journal of Clinical Endocrinology & Metabolism – is the first clinical trial to evaluate the endocrine and metabolic effects of resveratrol on PCOS.

Resveratrol is an antioxidant present in many plants and a type of polyphenol called a phytoalexin. Phytoalexin is a substance produced as part of a plant’s defense system against disease. Resveratrol is produced by plant tissues in response to an invading fungus, stress, injury, infection, or ultraviolet irradiation, and it has anti-inflammatory properties.

Red wine, grapes, raspberries, peanuts, and many other plants contain high levels of resveratrol. Research has shown that resveratrol is linked to a reduced risk of coronary heart disease and cancer.

“Our study is the first clinical trial to find resveratrol significantly lowers PCOS patients’ levels of testosterone as well as dehydroepiandrosterone sulfate (DHEAS), another hormone that the body can convert into testosterone,” says the study’s senior author Dr. Antoni J. Duleba, of the University of California-San Diego. “This nutritional supplement can help moderate the hormone imbalance that is one of the central features of PCOS.”

Study participants were recruited at the Poznan University of Medical Sciences in Poznan, Poland, for the randomized, double-blind, placebo-controlled trial. A total of 30 women with PCOS were eligible for inclusion and randomly assigned to two groups that were treated daily with either 1,500 milligrams of resveratrol or placebo.

Evaluations in the form of blood samples were performed at the start of the study and repeated after 3 months of treatment to determine levels of testosterone and other androgen hormones.

Participants also underwent a glucose tolerance test at the beginning and end of the study to measure diabetes risk factors. Many women with PCOS are resistant to the action of insulin in their body and produce higher levels of insulin to compensate.

In the group that received the resveratrol supplement, Duleba and team observed a 23.1 percent decrease in testosterone levels, whereas the placebo group experienced a contrasting 2.9 percent increase in testosterone levels. DHEAS reduced by 22.2 percent in the resveratrol group, while, in comparison, the placebo group experienced a 10.5 percent rise in DHEAS levels.

The researchers found that resveratrol not only moderated androgen hormones, but it also improved diabetes risk factors. Among the women who received resveratrol, fasting insulin levels declined by 31.8 percent during the 3-month study. Furthermore, over the course of the research, the participants of the resveratrol group became more responsive to the hormone insulin.

“The findings suggest resveratrol can improve the body’s ability to use insulin and potentially lower the risk of developing diabetes. The supplement may be able to help reduce the risk of metabolic problems common in women with PCOS.”

Future research by the team may focus on identifying the mechanisms behind how resveratrol corrects hormone imbalance in women with PCOS. The researchers hypothesize several possible mechanisms that might be considered, such as the direct inhibition of specific enzymatic activity, a reduction of growth of endocrine cells, and the improvement of insulin sensitivity with consequent reduction of insulin levels.

Read about how consuming soy may help prevent diabetes and heart disease in women with PCOS.