Squalamine, a chemical compound found in dogfish sharks, has the potential to reduce the formation of toxic proteins related to the development of Parkinson’s disease, new research suggests. 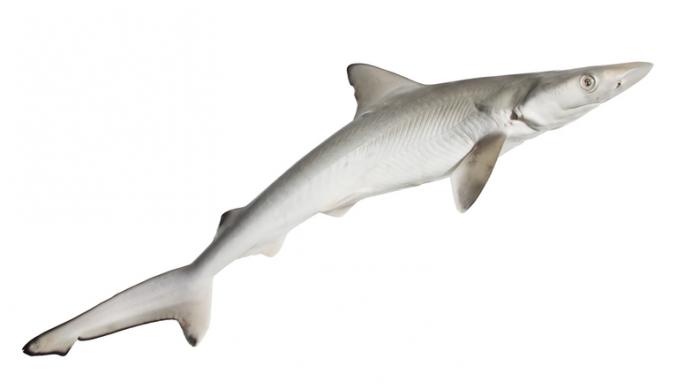 Researchers suggest that the dogfish shark compound squalamine could help to treat Parkinson’s.

Published in the Proceedings of the National Academy of Sciences, the study reveals that squalamine halted the buildup and toxicity of the protein alpha-synuclein (α-synuclein) in roundworm models of Parkinson’s disease and human neuronal cells.

Parkinson’s disease is a progressive condition characterized by tremors, movement problems, limb stiffness, and problems with balance and coordination.

In the United States, up to 1 million people are living with Parkinson’s, and each year, approximately 60,000 people in the country are diagnosed with the disease.

While the precise causes of Parkinson’s remain unclear, studies have suggested that the buildup of α-synuclein in the brain could play a role in its development.

In people with Parkinson’s, α-synuclein forms “clumps” that can cause brain cell death. Researchers are on the hunt for compounds that can block the formation of these clumps, which could help to treat or prevent the disease.

In the new study, study co-author Dr. Michael Zasloff, a professor of surgery and pediatrics at Georgetown University School of Medicine in Washington, D.C., and colleagues suggest that squalamine might be a potential candidate.

Squalamine is a compound derived from tissues of the dogfish shark. First discovered in the early 1990s by Dr. Zasloff, squalamine has been shown to possess strong antimicrobial properties.

For this latest research, the team set out to determine how squalamine affected the accumulation and toxicity of α-synuclein.

Firstly, the researchers conducted a series of in vitro experiments to see how squalamine interacts with α-synuclein and lipid vesicles. Previous studies have shown that vesicles – small, membrane-enclosed structures in cells – play a key role in triggering the buildup of α-synuclein in neurons.

The team then tested squalamine on the roundworm Caenorhabditis elegans. The first whole-genome sequencing study of C. elegans showed that the roundworms share at least 40 percent of their genes with humans, making them an ideal model for human disease.

In this study, the researchers genetically modified the C. elegans to overexpress α-synuclein in their muscle cells, which would cause them to become paralyzed as they developed.

However, when the researchers administered squalamine to the C. elegans orally, they found that the compound stopped α-synuclein aggregates from forming and prevented the toxic effects of the protein.

“We could literally see that the oral treatment of squalamine did not allow alpha-synuclein to cluster, and prevented muscular paralysis inside the worms.”

Overall, the researchers believe their study suggests that squalamine has the potential to prevent α-synuclein buildup. They are in the process of organizing a clinical trial to test the compound in patients with Parkinson’s disease.

The team notes that there are a number of questions that should be addressed by future research before squalamine can be considered a feasible treatment for Parkinson’s. For example, it is unclear whether squalamine can target areas of the brain susceptible to α-synuclein buildup when taken orally.

However, the researchers suggest that the shark compound could offer benefits via the gut.

“Targeting alpha-synuclein in the gut may perhaps in some cases be sufficient to delay the progress of other aspects of Parkinson’s disease, at least for symptoms concerning the peripheral nervous system,” says study co-author Prof. Michele Vendruscolo, from the Department of Chemistry at the University of Cambridge in the United Kingdom.

Learn how marijuana could help to slow Parkinson’s progression.

High Fat Diet, How To Enhance The Spread Of Cancer