The earlier a child is diagnosed with autism, the more likely they are to respond to treatment. And according to a new study, parents play a vital role in early diagnosis – the majority of them pick up on signs of autism in their child long before clinicians do. 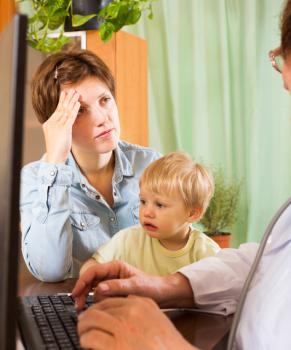 Parents of high-risk children diagnosed with autism reported concerns about their child’s sensory and motor skills as early as 6 months of age, the researchers found.

Published in the Journal of the American Academy of Child & Adolescent Psychiatry, the study of more than 300 families found that many parents of children at high risk of autism reported concerns about their child as early as 6 months of age, and that these concerns were predictive of autism.

“Parents are the experts when it comes to their kids and their observations are really valuable,” says study co-author Lonnie Zwaigenbaum, co-director of the Autism Research Centre at the University of Alberta in Canada.

“In some respects,” he adds, “parents are picking up on differences at 6 and 9 months of age that we have a much harder time seeing in the clinic.”

In order to make an autism diagnosis, doctors must assess a child’s development and behavior for signs of the condition. These can include problems with learning, communication and social skills, repetitive behaviors, short attention span, hyperactivity, unusual aggression and motor problems.

For their study, Zwaigenbaum and colleagues asked the families – some of whom had children at high risk for autism due to having a sibling with the condition – to complete a Parent Concern Form that gathered information on any worries parents had about their child’s development between the ages of 6 and 24 months.

Specifically, parents were asked whether they had any concerns about their child’s diet, sleep patterns, sensory behavior, motor skills, communication, social skills, interests and overall behavior.

At the age of 3 years, all children were assessed for autism using a gold-standard diagnostic assessment.

The team was not surprised to find that parents of children at high risk for the condition who received an autism diagnosis reported more concerns about their child’s development and behavior, compared with parents of high-risk and low-risk children who were not diagnosed with autism.

However, the researchers also found that parents of high-risk children diagnosed with autism reported concerns about their child’s sensory and motor skills as early as 6 months of age, and then went on to report language and social concerns around 12-15 months of age.

According to Zwaigenbaum, this finding “really highlights the importance of talking to parents and taking their concerns seriously.”

But another recent study reported by Medical News Today indicated that parental concerns are not being taken seriously when it comes to autism.

Conducted by researchers from Doernbecher Children’s Hospital Oregon Health & Science University and Oregon State University in Corvallis, the study revealed that among parents of autistic children who voiced concerns to health care professionals about their child’s behavior and development at around 2.3 years, their child did not receive an autism diagnosis until they reached 5 years of age.

The researchers of this latest study emphasize the importance of using parental concerns to action early interventions for autism.

“Parents play a critical role in implementing these interventions, building learning opportunities into everyday caregiving and play activities,” says co-author Lori Sacrey, of the Department of Pediatrics at the University of Alberta, adding:

“Where interventions are concerned, the earlier you can start with the patients, the better the prognosis is. If you can identify a child at a heightened risk earlier, before their first birthday, then you can start working with them to address early developmental difficulties, which can ultimately enhance their skill development and improve their outcomes.”

Recently, MNT reported on a study published in JAMA that claims the MMR (measles, mumps and rubella) vaccine is not associated with increased risk of autism, even among children at high risk for the condition.